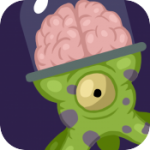 Outer space is dangerous, but a boy and his dog brave the final frontier to eradicate the alien scum that stole their house. Salvation (Free) is free to try from Russian developer Foggy Bus, but 99¢ unlocks the full experience: right now, that means two extra planets on top of the first, Plankton.

Each world contains 16 levels. The final stage throws a boss into the fray — a meaner, bigger alien in addition to the dozens of average-sized space creatures you’ll face. Although the background designs and planetary themes change and are quite nice to look at, gameplay remains largely the same throughout. It’s a merging of classic arcade styles that borrows mechanics from titles like Pong and Arkanoid, but if those references allude you, just think of this as a kind of 2D space defense and battle game.

Players position their left and right thumbs on either side of their device and slide up and down to move the vertical paddles. These bounce an energy ball back across the screen, and the angle of the hit determines its trajectory. Players will want to plan their strikes to take out as many aliens as possible, and there are plenty of targets. Many different species swarm the screen at once. Some even fire their own, smaller energy blasts, which you’ll want to deflect since the wall behind the paddles serves as your health. Take too many blows to one spot (four at the most), and it’ll crack for good. That’s when the aliens win.

Other enemies can crystallize themselves, forming a hard barrier that propels energy off its surface. At first I thought these green crystals were materializing on their own, perhaps to provide a power-up when shattered (early on, they only appear for a few seconds), but then I realized they were a certain type of alien defending themselves. This can actually work to your benefit as the crystals can extend the time your ball bounces in the middle by altering its course, just like in a game of pinball.

One of the users in the forums was dead-on when he noted that the first level is too long — actually, they all are, and it’s because they feel virtually identical to one another, like clones. Even the music (as funky as it is) grows quickly repetitive, only changing as you move to another planet. Bosses — really just stronger and larger aliens that require more damage to kill — add a little variety. One even shoots multiple projectiles at once, which can be tricky to manage while trying to aim your own ball into the remaining foes. The third planet, Hot-Dog, makes liberal use of these alien overlords in almost every level (rather than only the final area of each world), but it’s not enough to cull the feeling of monotony that pervades the experience. 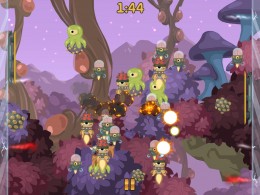 It’s a shame, too, because I like Salvation — or rather, I want to like it more than I do. It’s a fun concept, and the colorful, cartoony graphics are wonderfully designed. Every alien and background drips with personality. I want to visit these worlds named Plankton and Ice-Cream and Hot-Dog.

But it’s difficult not to become bored, as cool as it all is. I do have hope for the other three worlds, which are coming soon in an update, just because the developer made an effort to mix up the gameplay later on. A hard mode is available for those who find the difficulty too easy, and it’s likely that you will, but you’ll need to reset your progress to switch to it unless you picked the option from the beginning. Lame. At least the worlds stay unlocked.

Salvation also lacks a proper explanation or tutorial for those starting out. The story unfolds like a comic book, but without animation or dialogue, and it plays a very minimal role. Also, the level timer was a mystery to me for a good while. I could never beat the clock no matter how hard I tried, and taking too long didn’t seem to hurt my performance (it’s a three-star system). The timer actually seems to represent the spawning period for the aliens, but this is a feature that’s bound to confuse players at first.

Sometimes my thumbs seemed to slip off the hit boxes for the paddles, which made me lose some points as I couldn’t deflect the energy balls in time. The counter is so generous, though, that this is rarely a serious problem. It seems that as time passes, your defenses heal themselves. However, I have no idea if that’s actually the case because, again, Salvation does little to lay out its mechanics for the player.

Even though the action and strategy are the same every time, popping aliens is fun. I love their different looks and sizes, as well as how they float around on screen, and the way energy bounces around the crystals. The army of aliens grows so large that it really does feel like an invasion, and you’re wiping them all out as a simple boy and his dog. That’s hardcore.

Overall, I’d like to see Salvation do more: to challenge its extraterrestrial enemies to react in new ways and push the mechanics in wild and experimental directions. Most of its shortcomings are more the product of restrained imagination than anything else, and that’s a problem that could be easily overcome with a bit more thought.