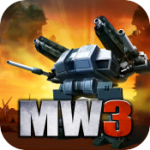 If you’ve ever built a car for a pinewood derby, then you probably know what I mean when I say having all the parts isn’t enough. Sure, you’ve got a piece of wood that kind of looks like a car and it has four wheels that spin, but you’re way back in last place while the rest of the heat is already at the end of the track. While your little block of sawdust chugs along, you wonder where you went wrong. You’ve got all the parts, after all. Is it not still a pinewood derby racer?

That’s kind of the question you ask yourself as you go about MetalWars3 ($1.99), the third and latest entry into Goorusoft’s MetalWars franchise. In it, you play as a mech pilot of the Bear Unit as part of ATLUS, a secret organization established to covertly fight against the oppressive Earth Federation. It’s the far flung future of 2100 AD and the EF, originally intended to unify the entire planet, is busy fighting the Resistance Army after the Federation decided that imperialism was the hot new jam, so ATLUS sprang up to fight black ops style.

Or that’s what I gathered from the MetalWars3 website. The story presented through the actual game is rather slim. The questionable grammar of the little text blurbs that pop up before and during missions isn’t even the big problem here; it’s that they come and go so quickly. Even at skimming speed, I barely got to the halfway mark on most of the info dumps, making it extremely difficult to understand why I was storming base or defending a wall or escaping a facility. 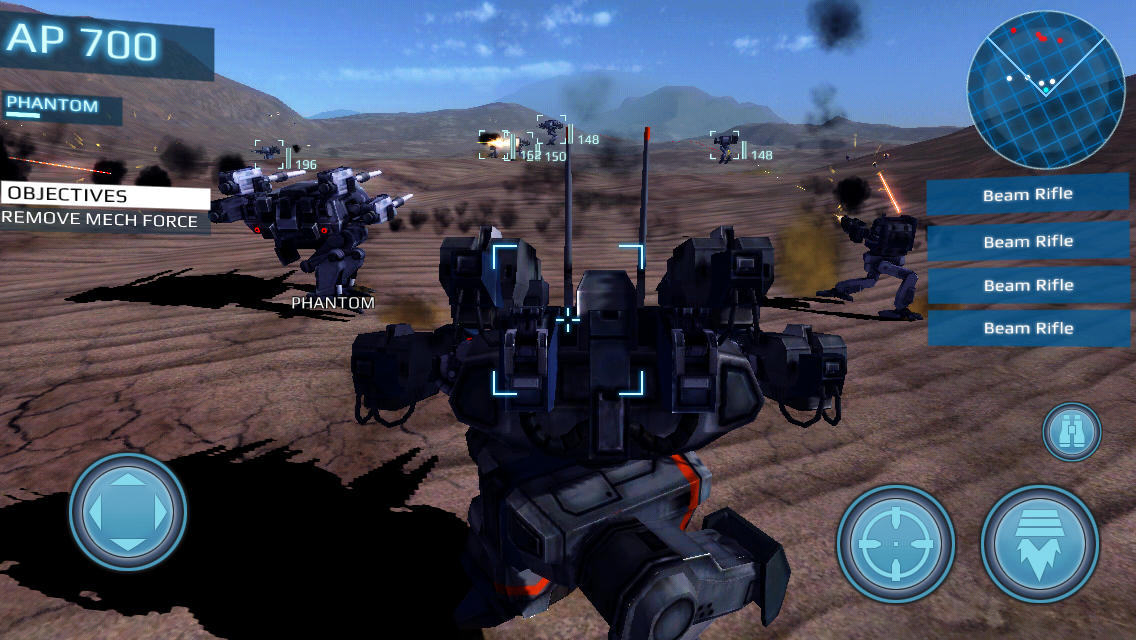 That’s kind of understandable, though, since the gameplay is the meat of the experience here. On the left side of the screen, there’s a digital nub that controls your movement while touching and dragging anywhere else on the screen will control your aim. You have three buttons dedicated to shooting, firing your rocket boosters (to jetpack around), and zooming in while you can also choose to discretely activate and deactivate each individual weapon you have equipped.

Moving and aiming is actually quite responsive and thus rather nice. I never had a situation where I felt like the game wasn’t doing what I wanted it to do. Two design factors contribute to this: 1) you always need to be moving to avoid incoming fire, so losing track of your movement nub isn’t really an option, and 2) if you are close enough to an enemy and you can keep them in a larger square reticule, your weapons will automatically lock on, giving you a wide berth for tracking shots. 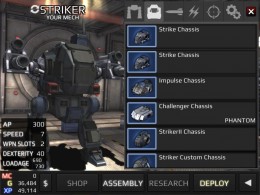 The problem is that every part of that loop of dodging and shooting and boosting moves at the speed of boredom. I couldn’t grok much in the way of scale, but I could easily see a person walking right next to my mech and asking me to move aside so they can get by. And there’s a lot of lifting your right thumb and putting it back down to track down wherever that last enemy is that’s shooting you in the back. I’ve got pretty big hands, and it still took me about five thumb swipes to pull a full 180.

And then once you’re actually engaged with an enemy, the experience can change drastically. At first, it can be challenging and actually require a fair bit of technique and strategy to survive (the third mission is a sizable jump in difficulty). You’ll have to spread your attention across multiple enemies to game their AI so they don’t surround you, and watch for walls and rockets so you can jump back around and leave yourself room to maneuver. Even having to watch your weapons and booster meters so they don’t run out and leave you high and dry while they recharge adds to the tension.

Once you upgrade even just a little bit, though, missions become little more than four-minute exercises in circle strafing. Upgrade your radar and you can keep your distance and never really risk getting hit. Upgrade your defenses and missiles and lasers can’t touch you. Upgrade your power module and you don’t have to ever stop dumping round after round into mechs, the ground, the air, or whatever you want to shoot. Missions stop being experiments in strategy to get a better rank and become a countdown to completion. 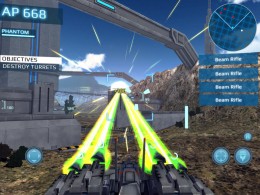 At least this means upgrades actually feel purposeful. I kept going in this game largely because I wanted to see how the next upgrade or mech would impact my experience. Every upgrade is stuck under a research tab off the main menu and it all branches off into rather deep tech trees. Once you commit to a certain style of weapon (long range, short range, etc.), it’s best you stick with it because the payoffs at the end are well worth it. And there’s a nice change-up in the mechs you unlock in that with the shotgun weapon tree, you actually unlock faster but less armored skeletons instead of slow, heavily fortified ones. Those mechs are a wholly different experience improving on its otherwise glacial pace.

It’s just unfortunate that the upgrades happen at a similarly molasses-like speed. There’s an in-app purchasing scheme where you can spend money on Metal Credits, which can then be exchanged for gold or XP, in-game currency used for purchasing upgrades and unlocking upgrades respectively. This somewhat justifies the grind for earning gear for free, but the game itself also costs $1.99, so you already feel disinclined to spending any additional money.

All the grinding also has to be doubled because you fight with a partner. Codenamed Phantom, he’s just another mech that you can deck out with more weapons and gear, but that also means you have to earn more gold to buy those items. Often, though, I would just let him go off to the side as a bullet sponge while I did the meat of the combat. He usually represented nothing more than a conduit to flanking tactics (which was appreciated) and usually was the sole source of damage to me in certain missions (which was less appreciated). He was good for a couple of chuckles, though; whenever he dies, my pilot would utter things like “finally…” or “escape…” I’m not sure if my dude is supposed to possess a significant amount of psychosis, but it was funny either way.

Superficially, the game does rather well. It looks fantastic and runs smoothly, loads quickly, and has some really good mech-fighting music. It’s the sort of stuff I imagine the pilots would listen to if they went to a club and argued about whom the better shot is. The upgrade process could be streamlined a bit by being able to equip new gear upon purchase, but that’s a minor complaint. The forums don’t seem to mind.

MetalWars3 has all the parts to a mech game. In fact, it has many parts to what would make a good mech game. The upgrades you pick actually affect how you play the game, there can be actual nuance to the mechanics, and the things coming into your eyes and ears are rather pleasing. The problem is that as you keep playing it, the game begins to undermine itself, and you long for one of the speedier pinewood racers.