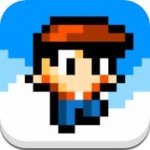 Well I was pretty sure that Brick Roll would be the game to steal my heart this week, but then Kid Tripp came along and now I don’t know what to do. A hybrid of auto-runner and traditional platformer, Kid Tripp from Not Done Yet Games is hard as nails, and borders on frustrating, but I just can’t seem to put it down. There’s also a heavy Adventure Island vibe, which was one of the game’s inspirations, and I’m totally digging it.

As I mentioned this is a hybrid platformer, so your character runs on his own. However, running into parts of the environment doesn’t hurt you, it merely stops your movement. It’s kind of like playing Super Mario Bros. with the right direction of the d-pad held down the whole time, which is pretty much how I play anyway. Do note though that there’s no going to the left, something that was a big point of contention with some people in 1-bit Ninja ($2.99).

Controls are simple and elegant. Touch anywhere on the left side of the screen to jump, and anywhere on the right side to shoot. You can also hold down the shooting side to sprint, and holding down jump while bouncing off an enemy’s head or a spring allows you to do an extra jump off of it. Those last two moves aren’t explained in the game, but are crucial to mastering Kid Tripp‘s levels. 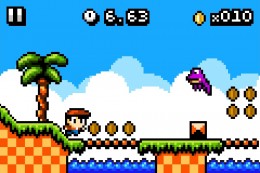 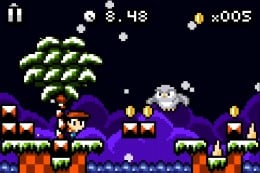 Speaking of levels, the one’s in Kid Tripp are very well-designed and remind me of the expertly crafted levels of Mikey Shorts ($1.99). There are often multiple paths to take or little tricks to learn about how to negotiate the terrain that can save you tenths of seconds on your completion times, making this a game that will probably be very competitive on Game Center. I think most anyone who grew up with Super Mario Bros. on the NES has level 1-1 committed to memory, and can rush through it with expert timing. That’s how it feels to play levels in Kid Tripp.

That aspect is fantastic but at the same time it’s also the cause of frustration. Kid Tripp is very much a trial-and-error kind of game, so expect to replay levels many, many times as you learn them and memorize where everything is. You have a set number of lives, though you can earn more by collecting coins and they seem to come frequently, but you’ll still have to start at the very beginning of a level each time you die.

The levels aren’t especially long or anything, but for a game where you’re going to be retrying so often it can really suck to die right before the end of a level and have to do it all over. Again. And again. And again. It’s a double-edged sword because it can be incredibly satisfying to beat a particularly tough level, but it’s also exhausting to get there.

My other major gripe is that currently Kid Tripp isn’t properly widescreen on an iPhone 5, though the black borders do receive your touch inputs so it doesn’t interfere with the controls. It’s just a cosmetic thing, and an update that fixes it is already in the pipeline, but it’s still annoying. Also I’ve had some weird screen orientation glitches when entering and exiting the Game Center interface, but I’m sure these minor issues will be fixed in future updates.

If you can hang with some very difficult level designs and heavy trial-and-error, you should find a lot to enjoy in Kid Tripp. If the game can be polished up and balanced a bit better with updates, it’ll go down as something quite special. Look for it later tonight in the US App Store, and find more impressions from players in our forums.