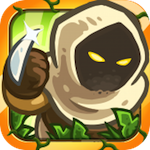 On August 1, the iPhone and iPad versions of Kingdom Rush: Frontiers ($0.99) will receive a huge update that adds a new land, new enemies, new heroes, and what looks like a wicked crazy boss fight against a map-consuming Kraken.

The upcoming update’s titled “Rising Tides," and as you’re probably assuming, its set in a coastal and watery world. Iron Hide Studios released the following teaser, showing off the update’s various finned enemies and the two new heroes. The former of which is a big turtle with a laser cannon. Can’t go wrong with that.

We’re guessing this will be an on-the-house kind of thing and not cost users any dough, but those details haven’t been released quite yet. We’ll keep checking. In the meantime, check out that trailer. We’re stoked for this one!