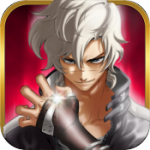 It would be a bit of an understatement to say that Square Enix enjoys a mixed reputation among iOS gamers. On the one hand, their iOS offerings are often extremely substantial compared to other titles in the App Store, with excellent production values, long quests, and unique gameplay systems that capitalize on the strengths of the platform.

On the other hand, they’ve been slow to embrace universal apps and cloud saving, their experiments with IAP have been audacious to say the least, and the prices of their games are relatively high. On top of all that, their customer support could best be described as bipolar, sometimes going months without crucial updates, and other times completely making over a game at no additional cost. Drakerider: Chains Transcendent ($11.99) serves unfortunately well as a symbol of the publisher on iOS, both good and bad.

Let’s get one thing out of the way first. This is not a new game. This is not even a low effort asset recycle like Chaos Rings Omega ($6.99). This is Drakerider (Free), which launched just about a year ago, but like a version 1.1 of it. If you have already purchased the original game’s episodes, I can’t possibly imagine the differences in this version being significant enough for you to jump in again. 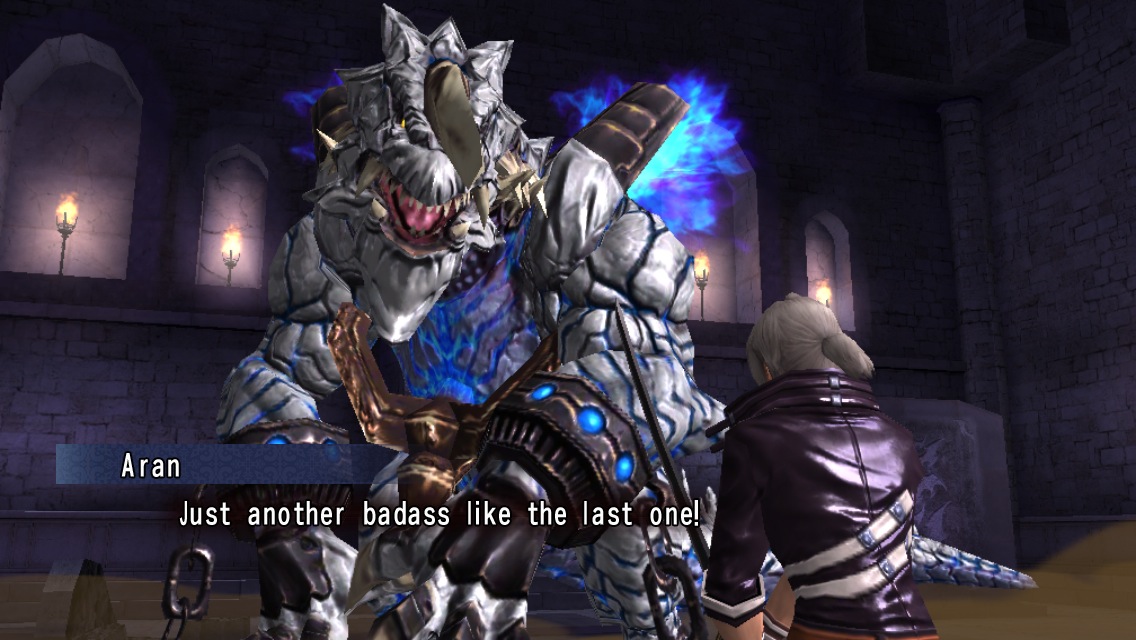 They’ve added a handy button to turn off random encounters whenever you like, tinkered around with the stats on some enemies to rebalance things a little, changed some of the cut-scenes that were just done “talking heads" style in the original into fully-acted scenes with the character models, and ditched the episodic purchase model for an upfront lump sum payment. To be very frank, this all should have been included in a free update for owners of the original game, and it’s pretty suspect of Square Enix to package this into an entirely separate app with a new name, and non-Universal to boot.

Well, anyway, it is what it is. Had we reviewed the original Drakerider, I probably wouldn’t be writing much about this at all, but as we did not, I’m going to review this game for the people who don’t yet own the game in any form, because there’s a very good game here that really didn’t deserve to get bogged down by its publisher’s antics. 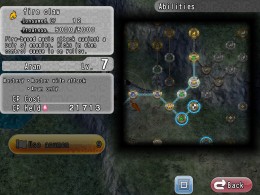 Drakerider: Chains Transcendent follows the story of a young man named Aran, who in the course of doing his job as a tracker gets roped into the dangerous job of becoming the apparent savior of his world. It sounds like a bad deal for Aran, until you realize that the position comes with a huge dragon. Aran’s dragon, Eckhardt, is no friendly luck-dragon, however. His fondest desire is to eat his master, and that aspect is the crux around which many of the game’s unique elements revolve.

The story is broken into five episodes, with each one finishing with an entertaining anime-style preview of the next episode. The story is weighty enough, with a variety of twists, predictable and otherwise, and like its iOS cousin Chaos Rings ($6.99), you most likely will not even have the faintest idea at the beginning of where it will ultimately end. As with many RPGs, it kind of gets in over its head at a point late in the game, leading to it feeling a bit hurried in its efforts to wrap up all the loose ends in a satisfactory fashion. Nevertheless, it’s an enjoyable ride with some interesting characters, particularly the cast stand-out (and show-off), Butch Brewster.

Generally speaking, you’ll be flying from one area to the next, walking around each map on dragon-back searching for a boss monster. There are a lot of areas in the game, but Drakerider isn’t shy about reusing elements of stages wholesale, sometimes with little more than a palette swap. This makes the areas feel a bit repetitive after a while, even though the stage designs are pretty good on their own. As you go through the stages, you’ll face quite a number of random monster encounters, though these can be turned off at any time should you choose. You’ll want to strike a good balance for keeping them on or off, though, lest your dragon be under-powered for the bosses. There are lots of alternate routes to take on the maps, some leading to nothing in particular, but most rewarding you with a treasure of some sort.

The battle system is probably the most unique element of Drakerider. As mentioned before, your dragon wants to kill you, and the only thing holding him back are the chains you’re binding him with. Your control over the monster is represented by a four-colored bar, going from blue to green to yellow to red, with the exact amounts of each color determined by your weapon. By swiping an on-screen graphic of the chains, you can try to control which point you’re at in the spectrum. Eckhardt will fight the pull of the chains, and should you enter the red zone, things can get very bad, very quickly. 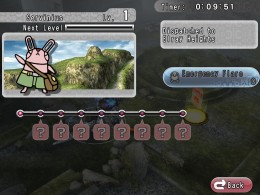 The colors themselves correspond to various skills you can learn and equip. Blue skills are generally defensive in nature, and while you’re in the blue zone, your character will focus on defending and healing any injuries ahead of attacking. Green represents physical offense skills, and your attacks will be a little more aggressive and frequent in this zone. Yellow skills are your powerful magic skills, and as you’d expect, the yellow zone is very useful when you’re going on the offensive. Finally, the red zone has no skills, but going into it will cause Eckhardt to go berserk. This will result in heavy damage to the enemies, but if you don’t get him back under control quickly, he’ll snap you up in one bite, bringing you to the game over screen. There is an additional cost to unleashing Eckhardt’s berserker fury, as he’ll take semi-permanent damage to his maximum HP that can only be restored with a very costly item.

Defeating enemies earns you experience points, which level up your dragon, and crystal points, which are used both to execute skills and to purchase new ones. By chaining certain attacks together, you’ll increase a multiplier for your crystal points. It’s not very hard to do, and it ensures you’ll probably have more than enough of them to go around. Buying skills is similar to a cross between the Sphere Grid of Final Fantasy X and the License Board of Final Fantasy XII. Skills are laid out on a spiderweb like pattern of chains, and gaining access to the better skills requires you to purchase and/or master the skills that come before it.

The one thing defeating enemies doesn’t earn you is the game’s currency, Tesserra. While things aren’t too costly in the beginning, new weapons, armor, and accessories get pretty pricey in the long run, so you’ll need quite a lot of money if you want to keep your gear current. You’ll find a fair bit of it laying around in the world, but when that runs out, you’ve only got a couple of resources to fall back on. 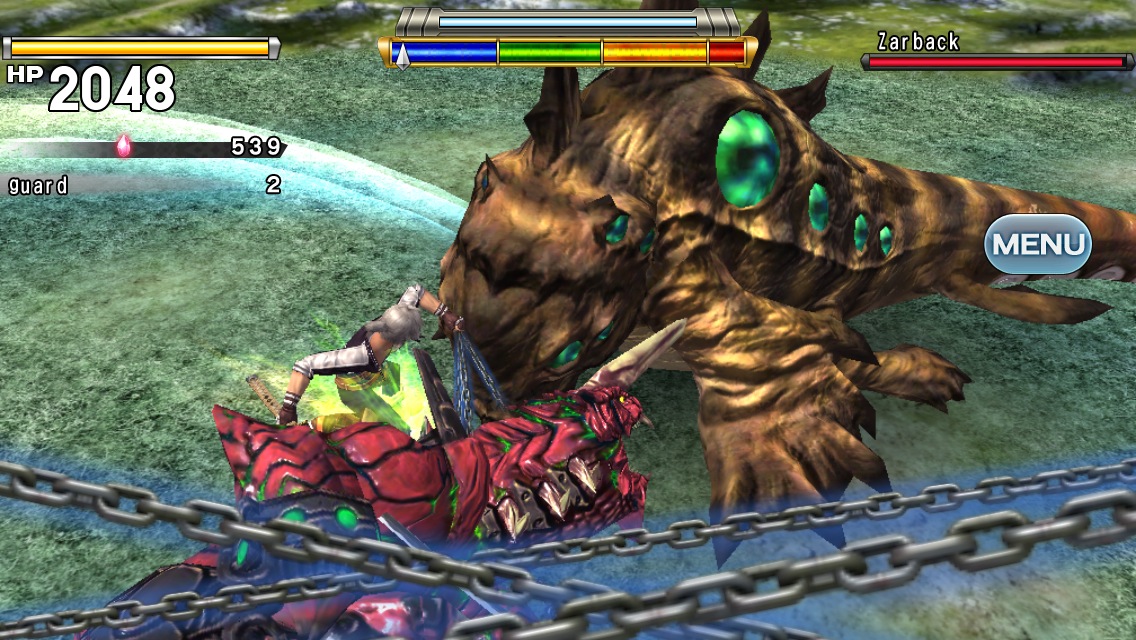 You can get a bit of cash by clearing mini-stages called Hypercubes, but the bulk of it comes from sending out a little helper to scour the stages you’ve visited in search of knick-knacks to sell. His trips take a set amount of real time to finish, and the best goodies can only be had by sending him out for eight hours. If you want him to come back early, you can use an item to do so, but that item is exceptionally rare, and if you want them, you’ll probably have to resort to the game’s IAP. I’m not really happy to see IAP in a game that’s already so expensive, and though you can probably get by without getting all the nice gear, it really hinders the notion of finishing the game in a short span of real time.

There’s more to this game that opens up as you play through, but some things are best left as surprises. Suffice it to say, there are wrinkles to this game that are not covered in this review that I’d rather you experience cold. Setting aside the shenanigans around how Square Enix chose to handle this premium version, Drakerider is, in both its original and updated form, an excellent game. It’s big, meaty, fun, and crazy in the right way, and quite worthy of its legacy. It’s a shame this particular release is a bit of a slap in the face, but if you haven’t played this one yet, and you dig JRPGs, dragons, or both, jump in.