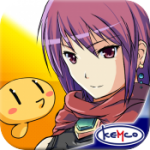 Another month, another RPG from Kemco. They’ve made so many of these already that one would be forgiven for thinking each is as good (or bad, depending on your point of view) as the next, but there are definitely good Kemco RPGs and bad Kemco RPGs. Avoiding many of the pitfalls some of their other RPGs fall into, Machine Knight (Free) is definitely one of the good ones.

The developer of Machine Knight is Hit-Point, who previously worked on RPG Fantasy Chronicle ($4.99) and RPG Dark Gate ($4.99). It retains and builds upon elements from both, and it’s easily the most sophisticated game they’ve done yet. If you enjoyed either of the prior games, you’re definitely going to feel right at home here. Before I get too far underway in this review, I will mention the game does have some IAP that unlocks some extra content that basically amounts to cheats. I never found myself needing any of it, so I didn’t buy any, and the game stood fine without it. 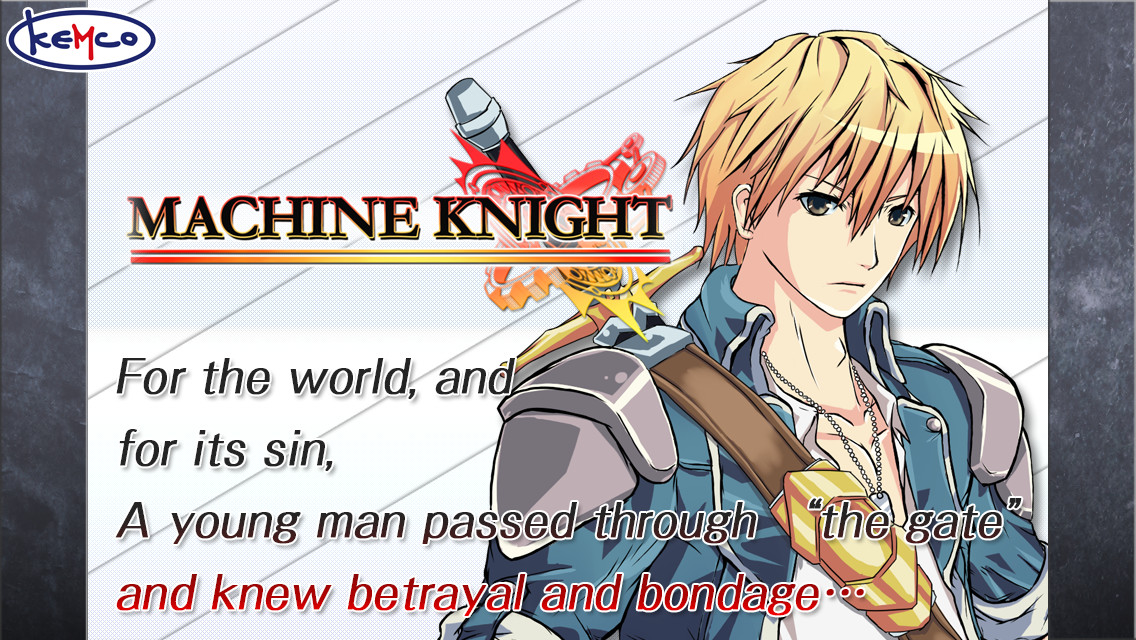 The story setup is more interesting than usual. The adventure begins not in some generic fantasy town, but in a futuristic world that is facing extinction due to the excesses of human life. Okay, it’s still a cliche, but it’s a new cliche for Kemco, you have to give them that. Anyway, as young scientist Frain, you are tasked with traveling to another world to try to procure resources that will stave off the apocalypse. This other world is unfortunately a generic fantasy world. Well, it was nice while it lasted. Naturally, not long after you arrive in the new world, things go sour pretty quickly, sending you off on a journey to collect elemental stones, a task that reminded me of classic Final Fantasy games in all the right ways.

Many of the standard tropes of JRPGs can be found here. You’ll go from town to dungeon to town, fighting turn-based random battles, gaining levels, gathering gold, buying new equipment, wandering around the world map, and talking to NPCs to gather information. It plays it pretty close to the usual beat, but it does so particularly well. In the last Kemco RPG I reviewed, Covenant of Solitude ($6.99), I complained about the poor dungeon design, fraught with ridiculous backtracking and copious amounts of floor traps. I’m happy to say the dungeons in this game are considerably better, with good layouts and some interesting gimmicks here and there to keep things fresh.

Machine Knight does bring a couple of its own ideas to the table, though they’ll be somewhat familiar if you’ve played prior Kemco games. First of all, the blacksmithing system from prior Hit-Point RPGs makes it return here. After collecting various materials from enemies and gathering points in the dungeons, you can take them to the blacksmith located in every town and have him forge more powerful equipment for you. There are a ton of secret items he can forge, provided you’ve found the corresponding crafting tomes for them. Unlike prior games, you don’t have a helper creature that you can send to gather the goods for you. Fortunately, the system is a bit more streamlined here, so instead of twenty types of metal, for example, there are only a few. It’s a fun system and I’m glad to see it being carried forward and refined.

Also carried forward is the quest system. In each of the game’s castles, you’ll find a special soldier who will give you optional quests to complete. These are like the quests you’ll typically find in MMOs, such as kill five of this enemy, or gather this many of that material. Finishing these quests will reward you with items, tomes, gold, and very useful special points (SP). 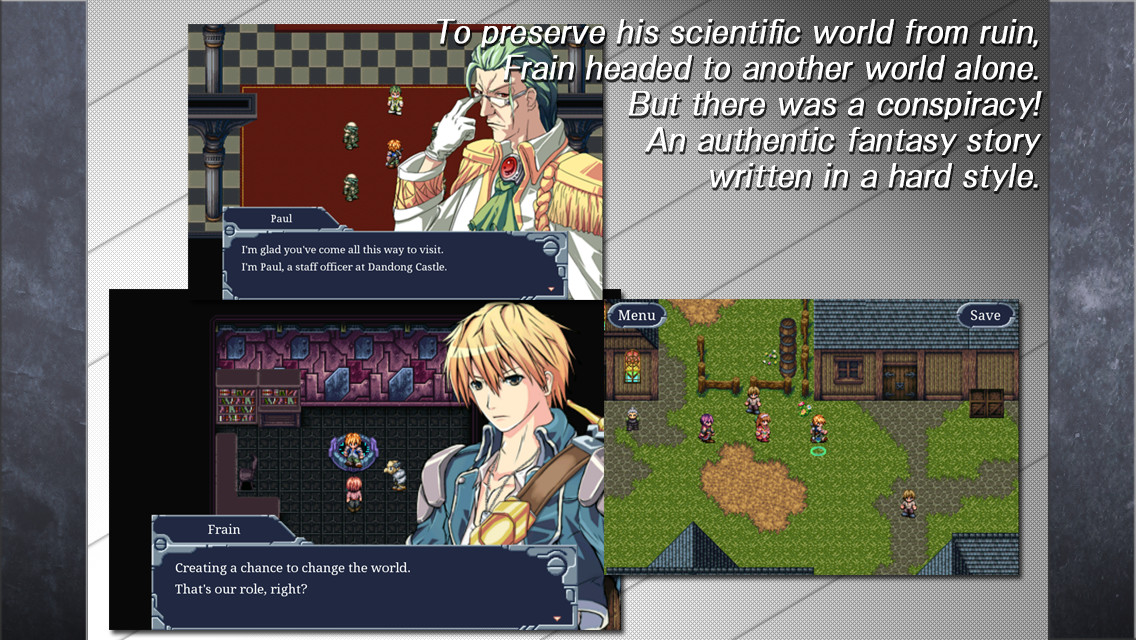 Special points are accumulated by killing enemies and finishing quests, and are used to level up your job classes and skills. Your characters all have their own base level that goes up with experience points. In addition, however, each character has a job class. As you spend SP to level up that job class, you’ll gain access to more and more of that job’s skills, which can also individually be leveled up with SP. Eventually, you’ll have the option to change jobs, opening up new skills depending on the combination of jobs you’ve acquired. You can choose which skills you want to equip at any given time. On top of all of that, you can also equip elemental stones to modify each skill. The amount of customization here is sure to please anyone who enjoys playing around with job systems in other RPGs.

Machine Knight‘s presentation is a bit up and down. The graphics are well-drawn and colorful, and the dungeons actually have a fair bit of variety in their tilesets. Monsters rely heavily on palette swaps to generate variety, but that’s par for the course in most RPGs. At least they’re fairly nicely animated. The music is nice but quite limited, with only a handful of tracks to carry the game through. You’re going to be very tired of all the music by the end of the game. The game’s translation is a little bit better than some of Kemco’s prior efforts, but it’s still very schizophrenic. At times, the game revels in what is clearly intentional goofiness, but there are still far too many typos, text errors, and long stretches of dry prose. I’m also not a fan of the menu layout. It’s a little awkward to shuffle through the options, whether you’re using the virtual or touch controls.

The story itself is pretty interesting, even though it’s lacking in surprises. I should admit I’m a bit of a sucker for stories involving time travel, even if it’s just a background element. The story focuses on a fairly small regular cast, but thanks to the generous amount of banter between them, the characters feel very well-realized. Frain is a scientist out of his element, and his teammates are from a world with only rudimentary scientific knowledge, and the game plays that fish-out-of-water aspect frequently to enjoyable results. It’s also a fairly lengthy game, though it’s not terribly difficult. While Kemco’s RPGs are usually 20 hour affairs for me, this one pushed to nearly 30 hours. Surprisingly, it went by really quickly. I’d start up to play a short round and end up putting in a few hours without feeling like any time had passed. That’s one of the nicer things I can say about an RPG, and I’m surprised to be saying it about one of Kemco’s offerings.

Even though I enjoyed it quite a lot, I don’t want to oversell the game. It’s not an innovative title by any means, but while it’s hewing the line pretty closely, it does so quite well. It could do with a little more challenge and a few less cliches, but it’s probably one of Kemco’s stronger releases to date on iOS. If you’re dead bored with JRPGs, Machine Knight is not going to reignite your passion, but if you’ve got a bit of love left in you for the genre, you could do far worse than this one, especially if you grab it during one of Kemco’s frequent sales.