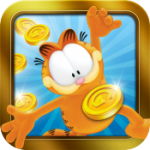 Right, I don’t care that Garfield’s Wild Ride ($0.99) is “just another endless runner"… it has Garfield! When I was a wee tyke, I had Garfield everything. I had a Garfield pillowcase, a Garfield ruler, Garfield stuffed toys, a multitude of Garfield books, hell, I even had a Garfield stapler. So yeah, I’m a bit of a fan. Jim Davis’ fat orange cat has provided me with many a warm fuzzy over the years and I still to this day enjoy reading about his antics.

What strikes me as odd is that with such a popular character, there haven’t been that many decent Garfield games over the years (at least predating smart phones) and the ones that I have played tended to stray from the cartoon series and books a bit too much. But when you think about it, there’s a pretty good reason.

In the books, Garfield does pretty much, well, nothing. He sits around on Jon’s chest, sleeps and eats lasagne. If he steps outside the house, he is instantly lost, so the extremely small area that he occupies wouldn’t make for much variety in a videogame. The brilliance of Garfield, for the most part, comes from his dialogue… or at least, his internal monologue, that only other cats have the mystical power to decipher. 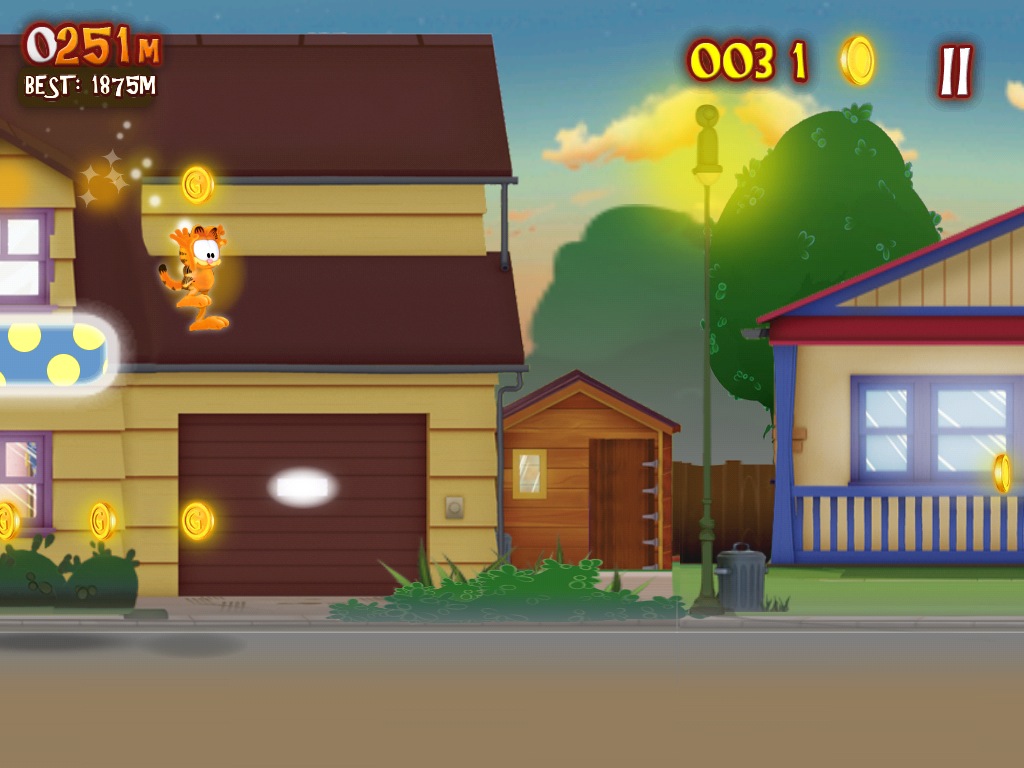 Garfield’s Wild Ride addresses the issue by following the chunky feline during what he does best; sleeping. Yes, the G cat is having a bit of a nightmare and it’s up to you to control him through this glowing world of weirdness, whilst collecting as many golden coins and greasy slices of lasagne that you can get your paws on.

Garfield’s Wild Ride is pretty much a Jetpack Joyride (Free) clone but thankfully, it’s an enjoyable one and not just a rushed hatchet job trying to cash in on the already over-populated genre.

As with Jetpack Joyride, Garfield “runs" left to right and when you touch the screen, he flaps his little arms like a giant, orange cat-nary and flies into the sky. The controls aren’t quite as smooth as the previously mentioned game but I think that’s more of a design choice, due to Garfield flapping about, rather than being propelled by some manner of jetpack. 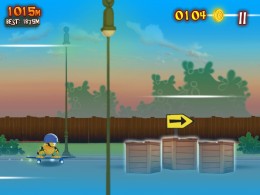 Of course, it’s not as simple as just flying up and down. Various obstacles enter the screen from the right, hell bent on turning our favorite cat into an orange smudge on the sidewalk. The most common obstacles are a strange hybrid marshmallow/mattress thingy that come in two varieties: static and the pesky pink ones that move up and down. There are also a bunch of other characters equally determined to snatch one of Garfield’s nine lives, such as witches, birds, cars and even UFOs. Oh and Garfield doesn’t really have nine lives, it’s an endless runner… but it’s also a game about a cat, so I had to get it in there somewhere.

Graphically, the artists have done an excellent job of capturing the colorful world of our stripy hero. Trees dance up and down playfully and the streets are populated by various ambling characters such as pizza delivery boys and dejected postmen, and everything is immersed in a dreamy glow.

The audio of the game is also of a high quality. The music is varied and extremely well produced. Each time you play the game, one of several different themes sets the mood, from 60’s pop to eerie sci-fi tunes and even a gospel-like ditty, keeping the ears nicely entertained.

Play-wise, the game is very well balanced. As well as his flapping, Garfield also has several power-ups at his disposal, such as Giant Odie, Pookie Bear, Super Garfield and a Super Skateboard. The power-ups are obtained by collecting the various cubes that appear from time to time throughout the game. Giant Odie basically acts as Garfield’s trusty steed for five seconds (longer via upgrades), also making him invincible for that time. Pookie swings around acting as a shield and remains in play until Garfield hits an obstacle, as do Super Garfield and the Super Skateboard. Super Garfield allows for faster flying and the skateboard takes away Garfield’s power of flight and replaces it with four wheels, a helmet and the ability to leap buildings in a single bound. The power-ups can also be upgraded to act as coin magnets. 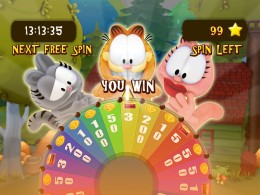 Now, this is all well and good, but unfortunately there are some bad points –  most notably, the IAP system.

Garfield’s Wild Ride comes with one theme installed, The Street. You can purchase extra themes with currency collected within the game but the cheapest theme (Jungle) is 100k coins. Even if you use the coin doubler (which of course, costs money), you’ll be lucky to average more than 400-500 coins a game, so you’d be back in nappies before you were able to unlock said theme. Then there’s the Island theme… a whopping 500k.

Of course you can outright pay for these items by buying extra coins, but you’ll be spending in the tens of dollars. Personally, I think it’s a little greedy and most people will simply make do with the default theme, which is a shame.

You can also upgrade your power-ups, and at first it’s relatively affordable, but as they level up the upgrade prices increase exponentially. On top of the themes and power-ups are a gazillion different options for costumes and head gear, as well as special effects like rainbows that appear to emit from Garfield’s bottom. There are also eleven different golden Garfield trophies that can be bought with the slices of lasagne collected during the game. All of these extras are utterly useless but fun nonetheless.

On top of the IAP prices, there are a few other issues, such as minor audio and graphical glitches, but the biggest bug is the fact that Game Center doesn’t work. These are minor niggles, as no doubt there is an imminent update to address them, but until then they remain a bit of an annoyance.

In all fairness, if you don’t like endless runners, you won’t like Garfield’s Wild Ride, but if you do, there is a whole heap of fun to be had without spending a single penny over the initial purchase price, though you may very well feel the urge to part with those hard earned bucks after playing this charming little game. It’s Jetpack Joyride but with Garfield – can’t argue with that now, can you? I love that furry little guy.