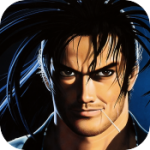 In 1991, a game named Street Fighter II came along and it started off a whole new genre. Okay, the one-on-one fighting game had already been around for a fair while but with its multiple punch and kick buttons, super moves and large range of characters, Capcom’s flagship arcade game redefined the genre and spawned a relentless swarm of clones. Arguably the largest contributor to the “Street Fighter clone" market was SNK.

Via their Neo-Geo MVS arcade system (and AES home console), SNK jumped on Street Fighter’s coat-tails with World Heroes, which, to be honest, is almost a direct ripoff – even the two main characters Hanzo and Fuuma controlled in an identical way to Ryu and Ken of Street Fighter fame. Despite being an obvious clone, World Heroes was actually a really good game in its own right and SNK wasn’t stopping there. Soon there was a whole range of SNK fighting games that were in direct competition to Capcom’s Street Fighter series, and one such offering was Samurai Shodown, which took the tried and true one-on-one fighting system and threw in weapons and full screen scaling (also used in Art of Fighting).

Samurai Shodown II ($2.99) is revered amongst 2D fighting fans as the best in the series and also one of the best SNK fighting titles ever. Step forward nearly twenty years and now you can play this epic bloodfest on your phone. But the question is, do you really want to? 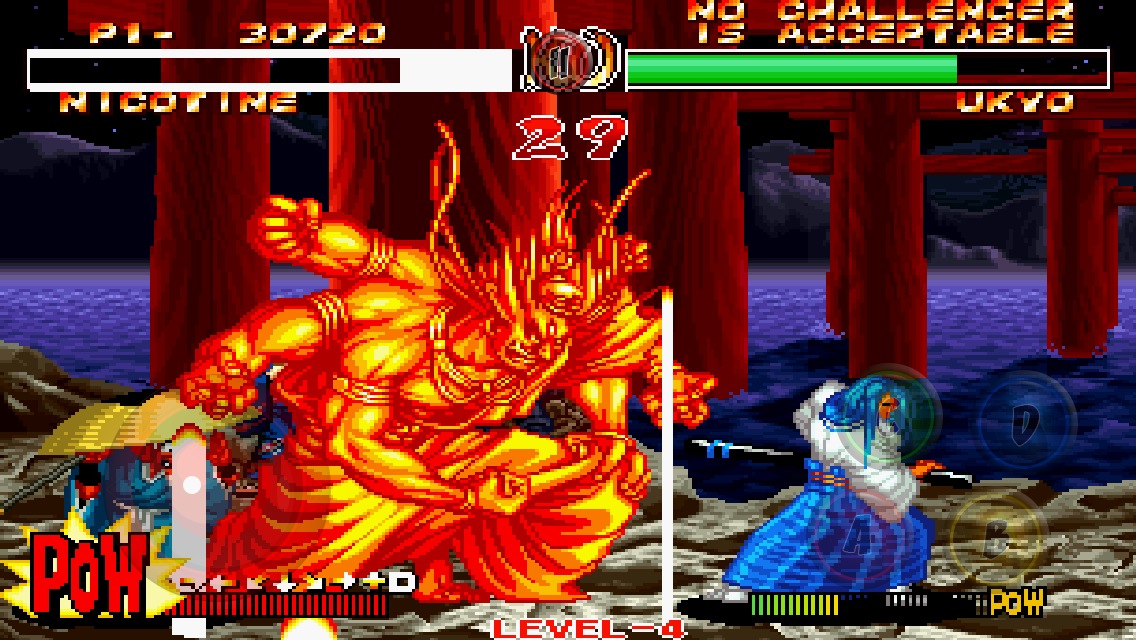 Firstly, let’s kick off with the good points. The emulation is spot on. The vibrant, chunky character sprites and animated backgrounds have never looked better than on an iPad Retina display. The music and sound effects are all arcade perfect and the clashes of the swords and tearing flesh effects are suitable meaty. Everything moves along at lightning speed and is absolutely gorgeous.

Samurai Shodown II is a direct translation, and as such, is a simple affair, pick a character and play through the handful of CPU characters, or you can play against a friend via Bluetooth. As a game that has remained untouched for the last two decades, the price tag is a bit of a shock, and that’s where the bad stuff begins. 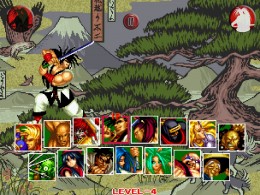 If you haven’t played a Street Fighter style game before, you’ll want to steer well clear if you’re after a bit of “pick up and play". These kinds of games are demanding and require a lot of patience and studying of sometimes extremely complex joystick and button combinations. The moves can be incredibly tough to pull off, in fact, even the most basic “special" moves take a bit of skill to be able to master and that’s when you have a decent physical controller.

Now, I am a huge fighting game fan. I have practically every version of Street Fighter II on various machines from Genesis to Xbox 360 and I also love the SNK range of fighters, so I am no stranger to Samurai Shodown II. I’m also not a stranger to trying to play these types of games on a touch screen and I never seem to learn my lesson. Every version of Street Fighter that is released, I pick up on iOS, despite how horrible it really is trying to use an onscreen joystick.

For example, the most basic special move; down, down/right, right, followed by punch, is an absolute chore and ninety percent of the time just doesn’t work. Don’t even get me started on the “dragon punch" style moves, or god-forbid, the much more complicated “super" moves. Add to that the fact that the joystick is way too big when played on the iPad, and you have one helluva cluster of crap. To be fair, SNK have included the full “command" list for you to study but it’s just not easy enough to put into practice. 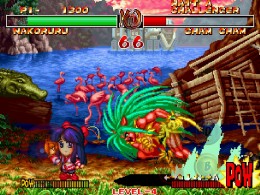 Luckily, SNK has seen to include an optional special move button, which allows you to pull off the moves without any joystick input but this takes away the skill needed and also, doesn’t actually work very well. I found that sometimes a certain move would be executed, but press the button again and a completely different move would be unleashed, often putting my character in harm’s way, as if the game wasn’t hard enough.

As a button basher, it’s okay. If you forget about trying to pull off the special moves and just want to beat someone about the head, there is a bit of fun to be had with the two punch and two kick buttons but that’s really not respecting the brilliant fighting system that lies at the heart of this title.

Content wise, Samurai Shodown II is what you’d expect for a nineteen year old arcade conversion. There are fifteen playable characters out of the box, each with their own back story and fighting location. The characters all range in fighting styles from samurai and ninja through to knights and that weird goblin creature, Gen-An. You certainly won’t be left wanting for variety but you will be left wanting for a decent controller.

Considering that Samurai Shodown II is easy enough to find and play via other means, and the god-awful controls and steep price of the iOS offering, I couldn’t recommend this to anyone other than the most hardcore SNK fan. A simple fix would be a control system that worked in a similar way to SNK vs Capcom 2 EO for Xbox, PS2 and Gamecube, which allowed the use of the right analog stick to pull off the special moves without the use of complicated D-pad input. It was a fantastic option for novices and allowed for fair fights between experts and noobs alike.

Until that system or something else suitable is incorporated in Samurai Shodown II though, you have a very pretty piece of videogame history that is probably best left to one of its re-releases on a console with physical controls, or if you have the cash, a real Neo Geo console.