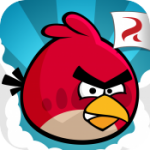 It’s an update-y kind of day, with Real Racing 3 and Badland both getting some new content, and now the King of All Mobile Games™ Angry Birds (Free) is getting in on the action too. I know what you’re thinking, though. “Angry Birds has had like 50 billion updates, what so special about this newest one??" Well, I’m glad you asked, because this latest update is actually quite a bit different than anything that’s come to Angry Birds before it.

The new update adds the Red’s Mighty Feathers episode with 15 new levels that change  up the typical Angry Birds formula. The Red bird has found special feathers that give him the ability to home in on the Piggies. In each of the new levels you have an unlimited number of Red birds to fling, but you aren’t flinging them at stationary structures like you normally would.

Instead, the Piggies are coming to you, or more accurately, the egg you’re attempting to guard. They’ll barrel towards you in contraptions that look straight out of Bad Piggies, and you’ll need to furiously fling your birds towards them to keep them at bay. Once you’ve destroyed one of their vehicles, the Piggy will hightail it back to whence he came, and you’ll need to actually make sure you pop that pesky Piggy before he’s able to escape.

The familiar 3-star scoring system is also turned on its head, as in the Red’s Mighty Feathers levels you’re given one star for protecting your egg, another for popping all the Piggies, and you’ll only gain that third star if you stay within the allotted number of Red birds used to finish the level. It’s tricky to get 3-stars in these levels, but thankfully it’s not based on some nebulous score threshold so you always know just what you’ll need to do to earn all 3 at any given time.

I have to say this new set of levels in Angry Birds is a real breath of fresh air. It uses familiar mechanics but in a new way, and there’s a much greater feeling of haste to get things done as the Piggies march towards your position. I hope Rovio continues to add these kinds of levels or further play around with the Angry Birds formula, and if you felt like the same ol’ same ol’ gameplay has gotten stale then be sure to check out the new Red’s Mighty Feathers update and I think you’ll be pleasantly surprised.