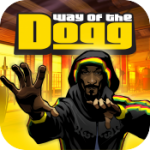 I was originally going to start this review as though I knew what I was talking about in the world of hip hop. I was going to use words like ‘swag’ and ‘fo’ shizzle’ but then I realized that I am an overweight, middle-aged, white New Zealander, which gives me about as much street cred as Mitt Romney. So, all I’m going to do is talk about the game.

Way of the Dogg ($0.99) is a rhythm game that has you tapping and swiping along to the many  beats of the man himself, Snoop Dogg (aka Snoop Lion). However, this is no mere Tap Tap Revolution, as a major part of the game is the story.

You play the character of the cheesily-named America Jones, who is on a mission to dish out some hefty revenge for the brutal murder of his girlfriend Sierra, by way of foot and fist. Along the way, AJ is mentored by Snoop who helps him level up his fighting skills in the various “Temple" levels that are placed between the main story stages. Snoop is also the main source of information when it comes to who AJ needs to hunt down next to give a little whup ass to. 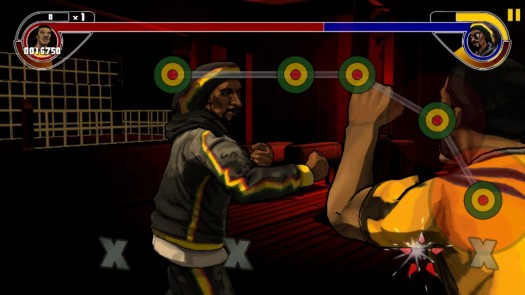 The storyline is reasonable, though nothing spectacular. Without giving too much away, it involves gangsters of both the street and mob kind, crooked cops and even time travel! The time travel is where things get really interesting, especially when your opponent, The Mystic, dons his magical… no, wait, better not throw in the spoilers…

Gameplay-wise, Way of the Dogg uses a unique system of “targets" that the player must tap in time to the music. At first it’s a little tough to get to grips with, as you don’t just tap ’em, you have to wait until the halo, for lack of a better word, around each target shrinks to the same size of the target itself, opening up the sweet spot. Once in a while you’ll also have to swipe through a bunch of targets quickly. These can be arranged in a straight line or circular. Pull off this move properly and AJ puts a whole load of beat down on the opponent, increasing your energy bar and depleting the opponent’s. Once you’ve punched out enough teeth, you move on to the next stage. Simple. 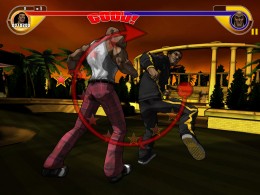 As well as the standard tap type targets, you soon encounter targets that must be swiped in a specific direction and sets of two targets that must be tapped, followed and released in time with the many beats of Snoop. This is pretty tough to explain in text and I’m doing as good a job of it as Betty White in a cage fighting match, but trust me, it works. As the levels increase, so does the difficulty and you are introduced to targets that are all linked together and must be completed as “combos". I haven’t played the Xbox360 or PS3 versions but as a touch screen game, this system works really well.

While all this tapping and swiping is going on, a cel-shaded AJ is doing his best to beat the proverbial snot out of his many opponents. the enemies range from street thugs to time-altering kung fu masters and even vinyl hurling female DJs. The animation is fantastic and the look of the game is perfectly suited to the bass-heavy Snoop soundtrack. One thing I did find though, is that the animations are a bit tough to keep an eye on when you are concentrating on hitting those targets in the correct order, so a lot of the eye-candy can pass by without receiving the respect from the old eye-holes it deserves. This is a bit of a shame as the animations are very, very well done. There’s kung-fu, flips, heads being bashed against railings… it gets really quite brutal. The cut scenes are also nicely drawn and the voice work is excellent for the most part. I did find it all looking a little too Grand Theft Auto-y, though.

Upon completing each level you unlock the next stage and often also are rewarded with extras such as biographies on the in game characters and background information on the fighting venues. According to the blurb in the App Store, you can also fight against friends in a multiplayer mode… and either I am missing something extremely big or it simply ain’t there… so be warned.

Way of the Dogg is a decent rhythm title. It borders on being a bit on the easy side, but you really can’t go too far wrong when you take martial arts, intrigue, murder and time travel and set it all to the music (albeit more family friendly) of one of hip hop’s most legendary heroes, who also provides a whole load of the excellent voice-acting. With nineteen levels and the sweet beats of the Dogg himself, you’ll be as happy as Larry, unless of course, you don’t like fighting, rhythm games or hip-hop… but who’s Larry, anyway?