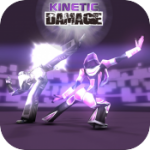 The fighting game genre, moreso than most, is one riddled with failures. Big companies like EA, Activision, and Konami have thrown their hats into the ring with nothing to show for it, and even the genre mainstays like Capcom, Namco, SEGA, and Midway/WB have had almost as many failures as successes. It’s very hard to bring something new to the genre without messing up.

Right from concept, Kinetic Damage (Free), a very unique fighter from independent developer Benjamin Marchand, seems to have the whole deck stacked against it. Yet, defying belief, this game is extremely well-done.

The game unfortunately makes a bit of a poor first impression. The UI is kind of low resolution and not very pretty at all. Then, once you get into a fight, the first thing you’re going to notice are the dreaded on-screen buttons. Furthermore, if you’re playing on older hardware, the visual detail in certain stages is going to drag things to an absolute crawl. Perhaps worst of all for the first-time player, Kinetic Damage is a very different sort of fighting game, so you’re probably going to be very, very bewildered in your first fight.

Sometimes first impressions tell the story, but in this case, the player is well-advised to persevere. 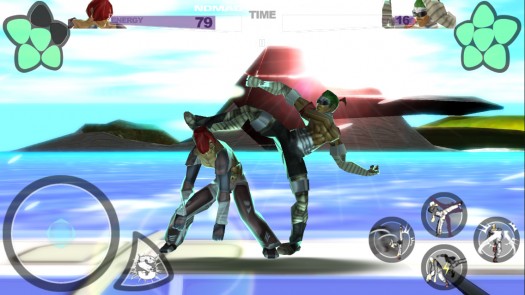 A quick trip to the options menu will allow you to adjust the level of visual detail, creating a much smoother experience. The on-screen controls, while obviously not the optimal way to play a fighting game, have the benefit of the gameplay system being designed around them, rather than the usual job of shoehorning an arcade game designed for sticks and buttons onto a touch screen. And as for that very different gameplay system that causes so much confusion in the first match? Well, that’s where the beauty of Kinetic Damage is found.

When you start the game, you’ll be presented with a few gameplay options on the main menu, and one of them is blacked out with a “Coming soon" affixed to it. That blacked-out option is a heartbreaker, but we’ll come to that later. For now, you can choose from Career and Match. Match lets you quickly get into a battle. As there are no actual characters in Kinetic Damage, you’ll choose from pre-built characters representing each of the eight fighting styles found in the game. Then you can choose the opponent AI level and stage, and you’re off to the fights. I strongly recommend trying Match mode first to get a feel for the different martial arts available. 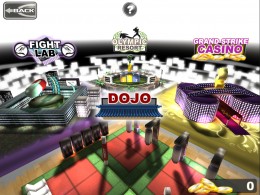 When you start Career mode, you’ll immediately be asked to create your fighter, and if you haven’t experimented with Match mode, you’ll be making a fairly hard-to-change blind choice when it comes to your character’s fighting style. All of the fighting styles are pretty famous, and the game does present you with the stats for each one, but the most important aspect, the moves, can really only be understood by playing. It would be nice if players could try out each style directly from the character creator.

Before choosing your fighting style, you’ll choose less consequential things like your character’s gender and appearance. There’s a fairly good variety of appearance options, and you’re able to adjust colors to help get you closer to the image you want, but more clothing and hair options would certainly be welcome. Still, for the purposes of making characters visually distinct, there are more than enough choices here to ensure no two characters look exactly alike.

After creating your character, you’ll be presented with a screen with four locations on it. There’s the Dojo, where you can go to spar in matches with no entry fee and build up a little cash, create a custom fighting event, hire a partner for use in team matches, and shop for upgrades for your character. Next is the Fight Lab, where you can participate in matches (again with no entry fee) where the prize is a modifier to your character’s stats for the next match you fight. The other two locations, Olympic Resort and Grand Strike Casino, both present you with matches with a variety of conditions, most of which require an entry fee. If you win, you’ll take home some more cash, a new teammate, an upgrade, or a modifier for the next match. The price of failure is usually limited to your entry fee, but sometimes you will also suffer a stat penalty for your next fight or even lose an upgrade. 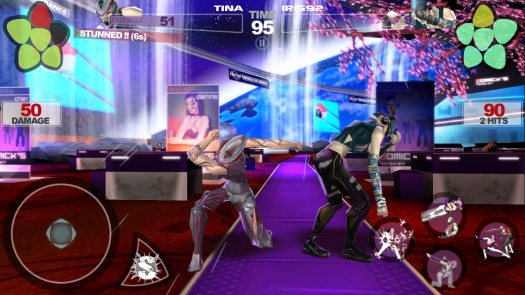 I’ve spent a lot of time talking about the frosting without talking about the cake itself, so let’s get into that. The combat system in Kinetic Damage is pretty different from what you’re probably used to from games like Street Fighter and Mortal Kombat. While, like those games, battles take place in a strictly 2D plane, the actual mechanics are very different. Your life bar is not a life bar at all. There are bars at the top of the screen, but those represent your energy, a resource used every time you make an attack and replenished when you’re standing still or blocking. Instead, your character’s remaining life is displayed as a star with six parts, representing broad areas on the body. As you take hits in certain areas, that portion of the star will go from green to red, until it is completely blacked out. Taking a lot of damage in a particular area will confer temporary penalties to your stats. Once the whole star is blacked out, you’re finished.

In addition to a directional pad for movement, Kinetic Damage has five buttons used for attacking. Pushing the two kicks and two punches, each in heavy and light, in combination with the directional pad will produce a variety of basic attacks, much like Street Fighter. Pressing the correct buttons in sequence will create combos, but more akin to Tekken, these combos are mostly preset for each fighting style. You can also attempt a throw by touching the opponent’s star when you’re in close range. Throws are resolved by tapping to fill a meter. This is also how you defend against a throw. 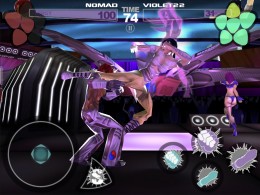 In addition to the pre-set combos, each fighter has a special attack. You can buy more from the shop at the Dojo, though each fighting style only offers a total of four. This is where the fifth attack button comes in. Special attacks are launched by holding the special button, located near the directional pad, which will change your punch/kick buttons to a palette containing your special moves. You don’t need to bust out any tricky directional pad maneuvers, but they do use a fair amount of energy, so you can’t really spam them even though they are simple to use.

It’s a unique system, but one that works very well once you’ve gotten the hang of it. Kinetic Damage promotes using a variety of attacks to win, and the energy bar encourages a balance of attack and defense. The fighting styles are all very unique and have a good balance of strengths and weaknesses, while remaining somewhat true to their real world counterpart. It’s fresh, it’s fun, and it’s utterly amazing that it’s the product of one person.

So what’s the bad news? Well, let’s go back to that blacked out option on the main screen. That option is Multiplayer. Yes, at this point in time, you cannot battle against a human player. The developer says it will be coming soon, and I certainly hope it does. The computer AI is quite good, presenting various levels of challenge, and there’s a lot to do in the Career mode, but the proof of any fighting game comes from the multiplayer. Until that mode is available, it’s really hard to gauge the balance of the various styles, which will determine whether Kinetic Damage is top tier or merely an incredible first attempt. It’s unfortunate that such an important element of the fighting game experience isn’t implemented at release.

This review has become very lengthy, so I’m going to stop myself here. Kinetic Damage is a very fresh, very exciting fighting game. If you have any interest in the genre, you need to try this game. Once multiplayer is implemented, depending on how things balance out, this will be even more of an effortless recommendation. Be sure to keep an eye on the forums to see how that all turns out, because a lot of people are enjoying this game right now and are hotly anticipating the multiplayer. For now, all I can say is that this is one of the more interesting fighting games I’ve played in a very long while.