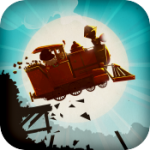 Bridgy Jones ($2.99) catches my imagination in subtly complex yet playfully joyous ways that few apps can. Published by Chillingo and developed by Grow App, Jones is a splendid blend of self-deprecating fun with an impeccable amount of eccentricity. Perfection is in the details and Jones makes them intrinsic enough to grasp and simultaneously intricate for limitless evolution of gameplay.

I engross myself in the oddity of this construction puzzler. Players take conductor Bridgy Jones on a bizarre ride; in hopes of bringing cross-species love together. This seemingly juvenile plot is absolutely half the fun. Jones’ meticulous uses, or lack thereof, of speech and motivations for characters paints a clear, Pollock-like picture, recognizing how knowingly absurd this adventure will be.

The presentation is superb with minimal but gorgeous level design. Colors pop without being overwhelming and preserve the Dust Bowl-like aura. When running the app, I immediately notice how quickly menus and touch gestures respond to the tiniest of taps and swipes. The sheer appearance of Bridgy Jones is so laissez-faire that I’m in immediate dichotomy to the mental joust of the bridge-builder. 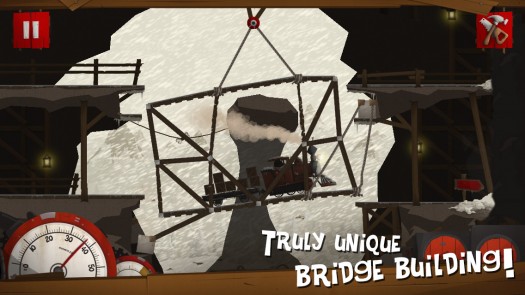 The destination is shown but the path is not. The goal of each stage is to traverse the uneven terrain by engineering the most effective and efficient bridge, chugging my train across its shaky structure.

I am left with an assortment of building materials, and the limitations of my mind, to get my ‘engine that could’ across mammoth gaps that separate me from the finish line. Any miscalculation of support truss or spacing of rails continually leads to failed attempts. In these failures, I am able to adjust strategies to make awkward and unique structures that still fail, but only after I cross them. Using the large quantities of ropes, boards, rails, and more, my ability to create is a never-ending pleasure.

Again, Bridgy Jones is brilliant because of its attention to detail. Starting a bridge scenario for instance, I can move the train with one finger while utilizing multi-touch to zoom in/out and see the next obstacle. During the construction phase, the ability to undo moves as necessary or swiftly scrap the entire production is available and greatly used.

Adding to the easy editing is a Fruit Ninja-like saw to cut down my wooden masterpieces, furthering the satisfaction of Jones‘ build-test-destroy-rebuild process.

The introduction to each level shows 4 optional challenges that can be completed in succession or in one trial. And, you can play simple chords with the challenge icons as each makes beautiful music, just because. By completing enough of these optional tasks, Jones’ special challenge levels are unlocked. These stages are unnerving in their creepy design and still amusing by way of the mindless chatter spewing from Jones’ mouth. Each detail is focused on player enjoyment and I appreciate the summation of options at my disposal.

Bridgy Jones provides laid-back humor and hours of gameplay, making it an unparallelled classic in the bridge building physics puzzler genre. I am thoroughly impressed and excited to see what else Grow App has on the horizon for the conductor and his mongrel. Hit the forums and see what others think about Chillingo’s instant vintage app.