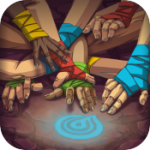 Perched high upon the face of a (relatively) ancient mountain, dark storms brood. In the shadow of the summit, the hands of warriors covet chromatic pebbles of arcane purpose. Eyes meet in silent determination. The games have begun. Bam fu ($0.99) is imminent.

It’s wrapped in a ridiculous premise – something Game Oven Studios is well aware of. The aesthetic of bound-fist monks and dire seriousness is embraced with just the right amount of enthusiasm.

The board is littered with colored circular runeish looking symbols. You want to turn the entire board to your color, because sharing never seems to be an option. You do this by tapping the figures of another color. Each additional player adds another color and pebbles cycle through colors in a set pattern. Simple. In practice, it becomes a furious flurry of hands and fingers and a meeting of temperaments drug to the surface. 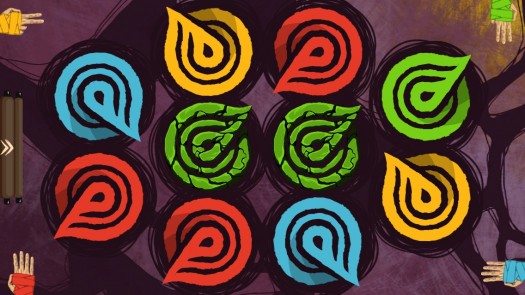 For my opponent and me (it was more of a hill than a mountain), it began politely. Precise, quick pecks. Attempts at victory through agility and speed. That didn’t last long. After a mere two or three rounds she began to play dirty.

If play unfolds for others like it did for us, the unspoken rules one might have expected others to abide by will swiftly be broken. She starts to brush my hand away. I reciprocate. Soon jabs are being blocked altogether as I sneak my other hand in to gorge on the unprotected battlefield. It’s startlingly conducive to subversive play, though it remained good natured for the two of us. I can easily imagine more rambunctious players physically bowling over competitors to steal an advantage.

It was a blast while it lasted. A quick, excited session of smiles and giggles. It was also exhausting. There’s a constant tension of muscle, limbs perpetually poised to strike as quickly as possible. The occasional solidification of the pebbles, demanding repeated hits to shatter and mobilize, sparks a concerted drilling of fingers, like woodpeckers grinding out their roosts to the fatal countdown of that cliched explosive.

Fast, thrilling, and fun. The quickest route to a shattered touchscreen. And then it’s shelved. Once it’s been digested, the rise of each player’s ostensibly illicit tactics witnessed, there’s little reason to go back to it. It’s a game of a couple rounds’ length, over and done with in a single sitting per group. For a single buck, though, Bam fu is quite worthwhile.