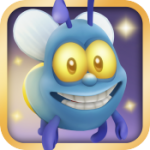 I have to admit, I’m a sucker for graphics. Sure, gameplay may be the most important aspect of any videogame, but you simply don’t want to play with it if it looks like the back end of a dump truck.

So there I was, looking around on the internet for games to review, and out jumped Shiny the Firefly ($0.99) from Spanish outfit Stage Clear Studios, and whacked me properly in the teeth with its pixelized perfection. This game is pretty. Seriously, it’s like playing a Pixar movie.

The animation of the hero himself is just gorgeous. Shiny has a multitude of facial expressions, which are beautifully realized… you’ll always know exactly how Shiny is feeling. I can honestly say this is the most emotionally linked I have been to a character in a videogame in a very long time, and he’s an insect for crying out loud. Every visual aspect of this game has been buffed to a level of shininess usually reserved for the rich and famous. 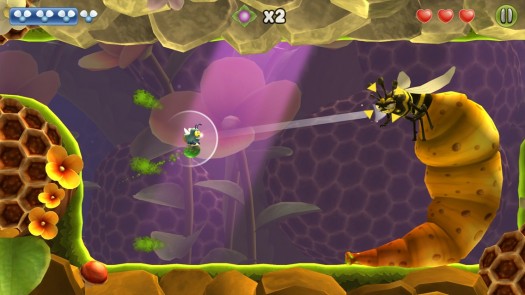 Right, enough about what it looks like, what’s it all about? Shiny the Firefly was outside playing with his thousands of babies (he’s a bit of a player) when suddenly a nasty sprinkler sprayed into life and wetly distributed Shiny’s children around the garden. It’s a simple yet oddly touching story, almost reminiscent of Finding Nemo, only with no fish… and thousands of babies.

Anyway, the aim of the game is to, of course, find and rescue your babies from the three (more to come) areas: Green Garden, Croak Pond and Sharp Railing. Whilst the names aren’t exactly awe-inspiring, the levels themselves are well thought out and require quick thinking, excellent timing and reflexes and a good pile of grey matter to get the job done. 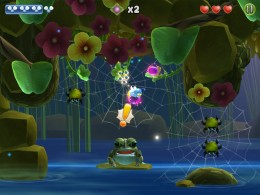 To control Shiny, you simply tap on the screen to where you want him to fly. Shiny can land on surfaces and hide behind flowers to avoid enemies and hazards such as waterfall, and he can dash via a double tap to escape enemies, break walls and shift blocks.

To complete each level, you’ll need to follow the onscreen indicators to collect your babies. Once you locate your six-legged children, you need to switch on your butt-light so that they can follow you back to the exit… but, be warned, the light also attracts enemies, so be careful when you use it.

You have a set quota of babies to collect during each stage, however collecting the minimum number won’t earn as many stars, and honestly, could you live with yourself if you left even one of those little cuties behind?

To help rescue the babies, as well as his stealth abilities, Shiny can pick up seed pods and hurl them at enemies. This seed shooting comes in handy during the boss battles too, which you’ll find at the end of each world.

Shiny The Firefly is, for lack of a less clichéd term, a true breath of fresh air in the App Store. The visuals are gorgeous, the environments immersive and the feeling of joy when you rescue your little tykes can only be equaled by saving all the Lemmings in the game of the same name.

I have honestly been looking for something bad to say about this game but I can’t find a single thing. Even the IAP is totally fair, used simply to unlock all the levels if you can’t be bothered playing all the way through, but trust me, you’ll want to play it all.

Shiny The Firefly has it all – slick controls, puzzles, epic boss battles… but most of all, it has my heart. Awwww.