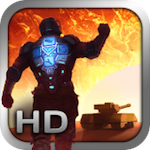 Being a creep ain’t all that bad. Well, at least, that’s what the Anomaly series has taught me. If you’re not familiar, these are tower offense games. Both have you play as the horde of dudes descending on a bunch of turrets instead of the other way around. It’s a neat twist that literally turns the genre on its head. And if you haven’t seen or played either, now’s a good time to jump on the train. Both Anomalies, Earth ($3.99) and Korea ($3.99), are on sale for a limited time.

The reason for the sale, by the way? Anomaly 2 is coming to PC soon. In fact, it’s hitting in just two weeks. Nothing like drumming up interest by basically giving away a game’s predecessors.

We don’t know if Anomaly 2 is coming to iOS, by the way. We’ve just shot over a note. Who knows! Maybe we’ll see it. Until, then, though, have fun with these two games. They’re both great. The first, if you remember, even grabbed our GOTY runner-up award a few years back. Ah, memories.