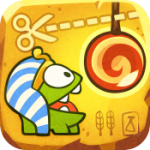 It’s the simplest games, the ones any player of any age can pick up and play, that become App Store sensations. Temple Run, for example. You tap and swipe the screen to keep your dude from falling down pits and running into walls as he runs forward. And Angry Birds? Even adventurers in galaxies far, far away know about Angry Birds.

Cut the Rope is another one of those “so easy your mom can play it" games that wrapped charming graphics, easy-to-grasp controls, and physics-based puzzles challenging enough to make you wrack your brain yet quick enough that you can solve one or two in a single setting in a 99-cent package. It also spawned a couple of sequels, the newest of which is Cut the Rope: Time Travel ($0.99).

Like the previous rope-cutting extravaganzas, Time Travel is all about feeding candies to the Om-Nom, an adorable alien critter with an insatiable appetite for sweets. Said candies dangle from the ends of ropes, and you swipe your finger over those ropes to cut them and send the candies swinging into the mouth of the Om-Nom waiting patiently nearby. 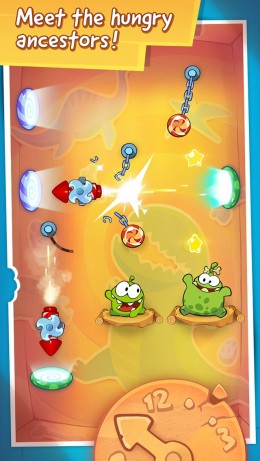 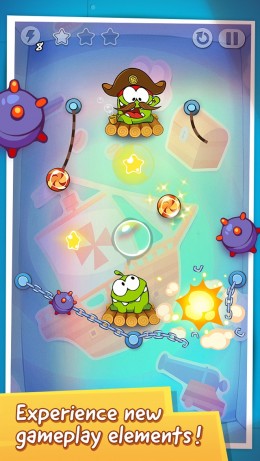 This time around you’ve got two alien mouths to feed: the Om-Nom, and its various ancestors from eras such as Ancient Greece, the Middle Ages, and a pirate ship. Because every great game has a pirate ship.

Levels are arranged according to themed time periods. To complete a level, you must feed both Om-Noms a piece of candy. Early on, passing a stage is as simple as cutting ropes and watching them swing like pendulums into the gullets of the little buggers.

Things get tricky soon enough. Each time period introduces unique mechanics such as spinning blades, time stoppers, spikes, pullies that let you pull back ropes and release candies like stones from a slingshot, and chains your finger can’t cut through. The level ends if you drop or destroy a candy, but you can retry as often as you like.

And retry you will, especially in later levels where split-second timing means the difference between aliens with full tummies and aliens that look at you like you just told them there is no alien Santa Claus. You’ll need trial and error and sharp reflexes to finish blink-and-you’ll-blow-it stages such as one that opens with your two candies plummeting from the sky. But there’s no pressure.

Between unlimited restarts and a smooth learning curve, solving puzzles is always more fun than frustrating. You’ll obsess over collecting the three bonus stars in each level, as I did, simply because uncovering the solution to dozens of cleverly arranged puzzles is so darn fun.

You might be tempted to skip Cut the Rope: Time Travel. It’s just another sequel, right? Nope. Time Travel offers a unique twist on an already solid formula. It’s an excellent time waster, one that every member of your family should enjoy.