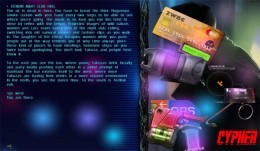 Late last year Lost Treasures of Infocom (Free) hit the App Store, and all sorts of horrifying traumatic memories of my childhood came flooding back to me as I inevitably got stuck in each of the games I tried following unlocking the whole $9.99 library of ancient interactive text-only adventure gaming. The sad thing (Well, that’s debatable, I suppose.) is that once the advent of computer graphics hit, these text-only adventure games quickly became extinct.

The good news is that indie duo Carlos and Javier Cabrera (Who together make up The Cabrera Brothers, shockingly enough) have been bringing back this method of storytelling with the (relatively) recently released Mac and PC game Cypher which is billed as a “cyberpunk text adventure." Weirder yet, it’s made in Unity, the game engine you probably know best from amazing looking 3D games like Dead Trigger (Free). Cypher reviewed well, although it came with the obvious caveat of “You’ve got to be in to text adventures."

The reason this is all relevant is becomes The Cabrera Brothers are working on a new project, a horror adventure, that’s going to be making its way to iOS devices as well. As someone who would’ve vastly preferred playing Cypher on the iPad, I’m pretty stoked to hear this news. One of my favorite things about the App Store is its ease of access facilitates crazy projects like this. I mean, a brand new text adventure in 2013? That’s crazy, but I love it.

If you’re interested in checking out Cypher for the Mac or PC, head over to The Cabrera Brothers’ web site where you can download a DRM-free copy for anywhere between $15 and $25 depending on how many “bonus" items you want with it. Additionally, If you want to be alerted for news (and a potential release) of their upcoming horror game, make sure to add this game to your TouchArcade app (Free) watch list.