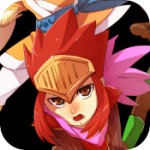 RPGs and matching games are a proven combination, one that’s been explored thoroughly since the good old days of Puzzle Quest. There may be variations yet to be discovered, though. Take Dungeon Hearts ($0.99), the boss rush of Puzzle/RPG hybrids. It’s a frantic matching experience that lets up only when you win or die.

Your party, a fighter, mage, healer and archer, line the left of the screen while a parade of enemies take their places on the right. One after another you knock them down, desperately grab your reward and start in on the next. Your health is whittled down all the while, and you’ll have to be both skilled and lucky to reach the end. There’s nothing to give you an advantage – no gear, no skills retained between attempts. All you have is your own talent for gem matching to get you through fight after fight. 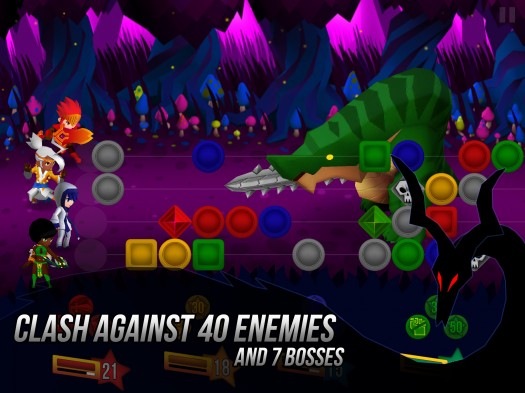 If that’s what you’re expecting, a run through Dungeon Hearts can be a thrilling, pitched battle. Each of your heroes has a color of gem that serves to create his or her attacks—chargers, they’re called— and matching three of them turns them into a weapon, a striker. The fights start off easily enough, with just those four colors of chargers to match, and the occasional enemy striker coming down the line. Tapping one of your own strikers will clear out any enemy strikers on the same row and column; letting an enemy striker hit one of your heroes on the far left will cost that hero a few hit points.

Almost every rune can be dragged around the field freely, including the enemy’s strikers. Early on, this means you can finish plenty of fights quickly by setting up outrageous combo shots and blasting the enemy with massive damage. Later, the field gets both more complicated and more claustrophobic as colorless chargers block your movement and certain gems refuse to be manipulated. 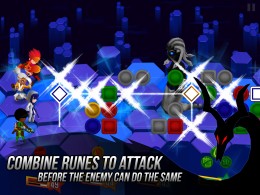 That’s only the start of a steep rise in difficulty. The enemy gets hexes that debuff your heroes, buff the enemy or turn the field further against you. Some monsters you face have strikers that need to be hit twice, or hit with certain colors, or matched with your own chargers. And combos get fewer and further between. Frustratingly, you can never be sure if you’re getting close to finishing a particular foe. Enemies don’t have hit point indicators, and the spam of attack numbers across the screen is nearly impossible to keep track of.

Aside from your pro matching skills, one thing stands in your favor. As you kill enemies, your heroes gain experience. Between each fight you have a chance to make as many matches as you can from a quickly passing wall of gems, and each match translates into experience. It’s part puzzle, part luck—you can generally clear enough space to work with the bonus gems, but there’s never enough time to match them all.

As your heroes level up, they get skills. The fighter and archer get special attacks that hit the enemy directly, the healer can heal and revive, and the mage can alter the field. These can change the tide of combat, but only occasionally. Most of the time, your speedy gem matching is the only thing that can save you. As your heroes fall, your chances to attack crumble with them.

It’s fun pushing through the list of enemies, fighting until the last hero collapses before a greater foe. Fun, but not particularly compelling. The battle is frantic, but it isn’t quick—and how many times are most players really going to want to fight through enemy after enemy for upwards of an hour if they’re going to claim a win? It’s not even the sort of game you can put down and pick up later, since it saves your place only manually.

Dungeon Hearts is good for a jaunt out into the land of RPG battles, but it asks for more dedication than it inspires. Despite its RPG trappings, it’s really a puzzler that’s all about the high score. It just lacks the punch a great score-chaser requires. With a few small tweaks it could be a great game of endurance, but that’s not the sort of endurance most RPG fans expect. Expectations aside, Dungeon Hearts can be great fun. Just don’t let the battle music and cute little heroes convince you you’re settling in for an RPG.