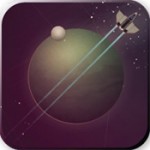 Since we first saw it in person at GDC 2012, Drifter has been under heavy development by Celsius Game Studios. The sandbox space trading game is approaching the final months of its development and studio founder Colin Walsh stopped by to show us some of its sights.

If you’re not familiar with Drifter, it takes place in a massive open-world sandbox. You captain a small trading ship and work your way up the space food chain with new equipment and new ships. How you do that is up to you: mining and crafting, trading goods between systems, hunting pirates for bounties or engaging in piracy yourself.

We had a chance to take a look at a few of Drifter’s current systems: the space station, the fast travel system and a fair bit of combat. The pirates were shy about coming out to play, but we managed to start a pretty impressive firefight nonetheless.

It sounds as though there are still quite a few systems to come: crafting, communications, RPG elements and a whole line of story missions to guide players through the galaxy, among others. The interface is also due for a major overhaul soon. Colin tells us he’s hoping to have the game ready to go this summer, and we’ll be keeping an eye on it to bring you more as it approaches release.