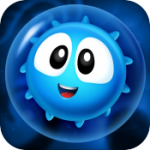 Chillingo’s position in the App Store has become somewhat of a double-edged sword. As a mega-publisher with a huge user base, getting signed to work with them can mean instant success for a smaller developer. Yet with the crazy flood of new releases, the blessing of brand recognition can just as easily be a curse. Hand-crafted standouts from talented studios risk being dismissed as “this week’s Chillingo game," passed over by players and reviewers as they scour for something more ‘unique.’ Until a couple of days ago, I had typecast Room 8 Studio’s Cyto ($0.99) as one to skip. While checking out our forums, though, it became clear that it had readers intrigued and impressed, wondering why there wasn’t more being said. One non-stop play session later, I’m here to make amends.

Cyto puts you  in control of the world’s cutest piece of cytoplasm (I think this may be the only time someone has ever written the words “cute" and “cytoplasm" in the same sentence). A smiling, blinking, blue amoeba missing its memories and desperately searching for its friends and family. As usual in the puzzle platform genre, it’s all a thinly veiled excuse to fling, stick, and drop your way through a slew of bite-sized levels in an attempt to collect three tokens. In this case, glowing pieces of Cyto’s past. Familiar mechanics are where the slippery slope to boredom ends, however. 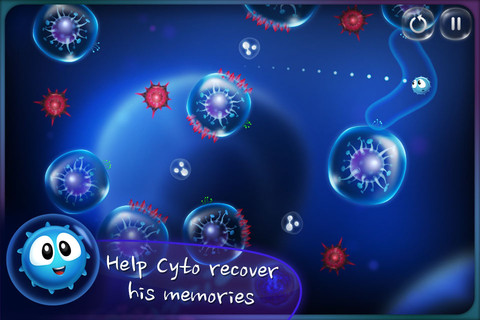 Deftly avoiding the trap of lazy visuals, Room 8 delivers a vibrant and ominous little world. Static backgrounds filled with painterly orbs and tentacles dwarf your microscopic protagonist and allude to the body of something sinister. Meanwhile, the playing field is abuzz with life as microbes pulsate and motes of glowing particles spiral in all directions. It even seems like Cyto is reacting to it all with wide eyes, agape mouth, and looks of trepidation mid-flight. Tying the experience together is an evocative piano soundtrack; part nostalgic waltz, part funeral dirge, it’ll have you taking the game’s recommendation to use headphones seriously. Cyto tickles a lot of the same synapses as Chillingo cousin Contre Jour ($0.99), and the comparison goes further with the game’s absorbing design. 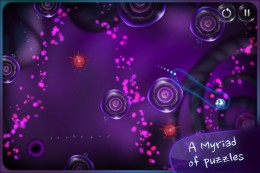 It’s a hallmark of too many three-star, one-screen platformers that I can barely remember one level from the next. They all mix together in a soup of vaguely rearranged obstacles and objectives that enter occupy my thoughts one second, and are gone the next. With Cyto, many of the game’s 81 levels stick around after the score screen has faded. This is due in no small part to the surprising sense of choice that runs throughout the game. Instead of having essentially two ways to complete each level – the easy way, where you careen straight to the exit, or the substantial way involving collectibles – it’s often apparent that you took one of a handful of paths to the level’s glowing exit orb. The meticulous arrangement of the game’s sticky surfaces, thorny obstacles, and precious open space allows for ample experimentation as you try to chart your course to the far corners of each level. I’d often finish with that wonderfully satisfying feeling that the way I played and beat the level had been a complete fluke; that only I had beaten it that way.

Cyto doesn’t mollycoddle when it comes the difficulty curve, either. The back nine levels in each world deliver shades of the same cerebral thrill that made Portal so spectacular. Instead of slingshotting around, proverbial guns blazing, you’ll have to digest portions of the level as you take yourself through the paces and consider cause and effect. When pulled off perfectly, the game becomes an opponent you outplayed in chess, conquered at the hands of your mental trapeze work. Easily the crowning jewel here is the game’s “gold" levels, given out as sadistic rewards for perfecting the eight levels that came before. Each one caps off the mechanics of that section, and adds huge longevity to the game by sucking you into a brain-busting challenge that’s best served when you have plenty of patience on hand.

Mechanically, Cyto is also a breath of fresh air. Sure it’s got all the typical add-ons like wind, portals, and bouncing pads, but every new feature rolls out in such that each stage has a healthy mixture of what you’ve seen and what you haven’t. Function even becomes form as new obstacles like multiplying spikes and fading memories throw a wrench in the game’s measured pace and turn levels into tense races against the clock. The result is an experience that very much keeps you on your toes…perhaps too much so, in some cases. The game takes a noticeable hit by demanding extreme precision, but not delivering it in return. Shots that launch you onto a safe piece of grass during one try seem to bounce you off a wayward edge during another; detaching Cyto to roll down an edge to the exit will often send him tumbling the other way, all with little to explain why. Luckily, the game traces your last five shots with angled dots, making retries far less frustrating than they could be.

That’s ultimately Cyto in a nutshell. With every opportunity it has, it proves that it’s not lowest common denominator fare. This is one of the few in this genre with the promise of more levels “Coming Soon" which has me eagerly awaiting the update notification on my iPad. Rather than judge a book by its publisher, pick this up today: it’ll be a delight for your left and right brain alike.

Editor Note: We’ve now got a second Eli writing for us. 😉