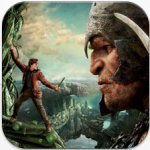 One of today’s more notable releases is Fallon’s Fury (Free), one of two (count ’em) upcoming iOS game tie-ins for Jack the Giant Slayer, a film that seeks to take the whole Jack and the Beanstalk tale to the next level. Boil it down, and it’s just a silly little adventure that revolves around breaking stuff. In the game, you’re put behind the wheel of a lumbering two-headed giant and are tasked with killing dudes, smashing buildings, and eating cows. Every time you do one of these things, you earn points. Points are a good thing, we think.

Fallon’s Fury only has one level and you can push through it pretty fast. In our play session this morning, Eli and I managed to “beat" game twice in about ten minutes. So, take that as you will.

If you’d like to check out, give the following a look. I should also note that our second run was a pacifist run. Ever heard of a non-human killing giant? We’re flipping the script over here!