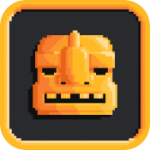 While a lot of attention is paid to iOS games that seek to replicate and modify the experiences of dedicated gaming devices, one area that has little competition to the mobile scene is the casual genre. Relic Rush ($0.99), from Forest Moon Games, is the latest title from the casual-minded producer and hits a lot of the right notes for a simple gameplay experience. While Relic Rush is a bit short on content and lacks some features that are expected in this day and age, it’s still a fun, simple platformer worth checking out.

Simply put, Relic Rush can best be described as Donkey Kong on auto-run. Players take the role of an explorer searching for lost relics. Relics are obtained by taking on missions, with each mission consisting of eight single-screened stages. Each stage puts the explorer at the bottom of an enemy filled setting and tasks him with maneuvering past all the baddies to get to a door at the top of the stage. Reaching the door leads to the next stage and so on (until you get to the last stage with the relic). Getting hit by an enemy forces the explorer to start the stage again from the beginning. 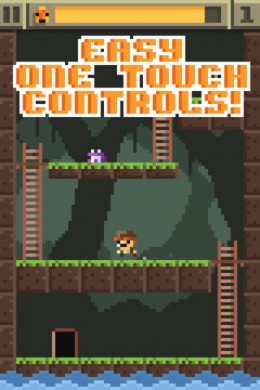 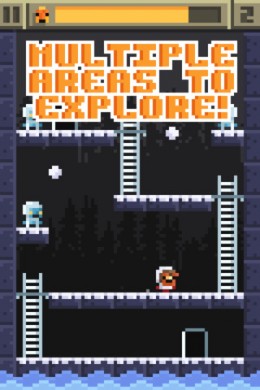 Meanwhile, a timer at the top of the screen keeps track of how long you’ve spent on the overall mission, with your final ranking being based on the timer’s position. When you combine the old-school graphics and music with the above gameplay, Relic Rush feels like a multi-layered retro platformer inspired by the arcade hit mentioned above. While this isn’t a bad thing, I did find the gameplay to be incredibly formulaic, with the game’s different worlds and enemies only doing so much to add some variety.

Where Relic Rush differs is in the auto-run controls. Your explorer is constantly moving and the only control afforded to you is to stop him (which can be done by simply touching the screen). Enemies and platforming elements are always in motion, so the entire goal of Relic Rush becomes a balancing act of timing your explorer’s movements, avoiding the enemies, and getting past the stages in as fast a time as possible. It’s an incredible simple system but it still offers room for timing and tactics. 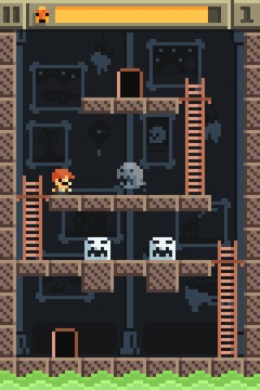 Thankfully, Relic Rush gets a lot of things right in making sure that its simple control scheme succeeds. The hit detection is near perfect, meaning that you (hopefully) shouldn’t be frustrated by errant enemy attacks when it looks like your explorer wasn’t touched. In addition, while the difficulty certainly ramps up in later stages, the challenge is never overbearing. I’d argue that Relic Rush is a little too easy, but considering its casual undertones, I’m not too going to complain too much.

Considering what Relic Rush gets right, there are a few missteps and omissions that I thought would have helped improve the overall experience. For example, Relic Rush lacks any Game Center support. While I don’t care much about the achievements portion of Game Center, I think leaderboard support would be a very nice add, especially for a game based on completing levels as fast as possible.

Of course, in order for leaderboard support to be meaningful, it’d help if Relic Rush also featured an actual timer for keeping track of how long it takes for you to complete missions. Currently, the only indicator is a bar that slowly depletes and changes color, letting you know when you’ve fallen down a relic tier. While this simplified method of tracking progress works with the rest of the game’s motif, I still would have liked something more detailed. This and leaderboard support would have gone a long way towards adding some replayability, an important consideration since Relic Rush currently only has twenty missions (with each mission featuring eight levels).

While the above concerns are important for players looking for some longevity, others looking simply for a casual title with an incredibly approachable control scheme and a cute retro-inspired theme need not look any further. Relic Rush may not have the length or variety to propel it to the upper tier of iOS casual games, but it’s still worth a shot for folks looking for a simple platformer to try.