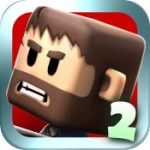 It’s hard to believe that it’s been over three years since Mountain Sheep’s Minigore (Free) hit the App Store. While the game started out small, it’d see multitudes of updates, making it one of the first “big" dual-stick arena shooters to hit iOS. Fast-forward to today and Minigore 2: Zombies ($1.99) looks to come out of the gate with tons of content, along with small refinements to the arena shooter formula. Unfortunately, fans looking for significant innovations will probably need to look elsewhere as Minigore 2 is really more of the same.

If you’re one of the few that have never heard of Minigore, you’ve probably at least played its genre: the dual-stick arena shooter. Minigore 2 continues the genre trend, placing players in moderately sized levels with the goal being to survive and destroy every zombie that gets thrown into the mix. Taking out the opposition earns ‘souls,’ which act as the game’s single currency. In addition, weapons, health kits, and four-leaf clovers (which still activates character powers) can also be found, giving players a leg-up on the opposition. Each level culminates with a boss battle that showers the player with rewards if the boss is defeated. At this point, missions can either be restarted with harder foes (a new ‘night’) or players can move on to a new level. 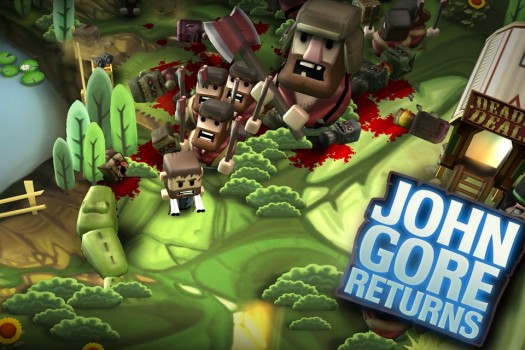 While Minigore 2 doesn’t really deviate from the traditional arena shooter, it does attempt to add a few new additions to spice up the gameplay. For starters, Minigore 2 offers a challenge system that lets players work towards completing certain objectives. Challenges range from environment specific (find and tap a specific element in a level) to weapon specific (gun down a number of zombies with a machine-gun) to gore-centric. Meeting challenges (along with defeating enemies) earn experience towards levels, which unlock more characters and weapons for purchase. While the challenge system isn’t particularly innovative, it’s still a nice addition and gives players a secondary objective to all the zombie killing.

Like the original Minigore, the traditional dual-stick control scheme still exists as well as an auto-aim system which effectively takes the ‘dual-stick’ out of the dual-stick shooter. While auto-aim worked relatively well for me, I’m not the biggest fan of relinquishing that much control to the AI. Because of this, I imagine most gamers would choose to forgo this option but I think it’s a great addition for newbies to the genre. 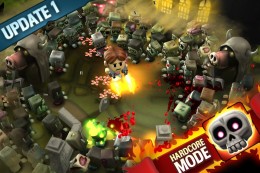 The most important area where Minigore 2 expands on the original is the sheer amount of customizability. Not only are there loads of new weapons, but there’s also a decent amount of environments available at the onset for unlocking. In addition, Minigore 2 continues the tradition of having tons of cross-over characters, each with their own stats and upgrade paths. When you add in the fact that each weapon and character can be upgraded a great deal, folks will have plenty to spend their souls on.

The refinements continue to other facets of Minigore 2. Visually, while Minigore 2 looks similar to its predecessor, improvements to the engine have the game looking a lot clearer and brighter than the first Minigore. Additionally, Minigore 2 has upped the ante of available enemies on screen, with support for over 150 simultaneous enemies. While I wasn’t keeping track too closely as to the number of enemies I was taking on, I can attest to the fact that the game ran pretty smoothly on my iPhone 5 regardless of what was thrown at me.

While all the improvements above are all well and good, the biggest issue confronting Minigore 2 is the simple fact that there isn’t anything groundbreaking added to the formula. Sure, the inclusion of challenges and the onslaught of new weapons and enemies are nice, but the overall game really plays like more of the same. When you take into consideration that Minigore 2 remains a basic arena shooter, this feeling of familiarity seems to be stronger as it really feels like there’s been no depth added to the game. A new update has added a Hardcore mode which adds a bit of variety, but not much. While there’s plenty of weapons and customizability available to players, they do little to actually change the game, which is (and always will be) a simple shooter.

Of course, that’s not to say Minigore 2 isn’t fun. In fact, I’d say this sequel is pretty high up there when it comes to basic dual-stick arena shooters. However, a lot has changed in the iOS gaming community in the three plus years since Minigore first launched. While a dual-stick arena shooter of this type was somewhat novel back then, today the genre is chock-full of contenders. The never-ending quest to get noticed means most titles need to offer some innovation or decent refinement just to rise above the rest. Being the sequel to a popular game, Minigore 2 doesn’t need any of that. Yet, I can’t help but feel that if this was made by any other developer, we really wouldn’t care that much.