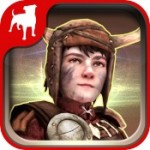 Over the summer, Zynga and Phosphor Studios released Horn ($1.99), a 3D action RPG that was heavily Zelda-inspired with combat mechanics that took a page or twenty out of Infinity Blade‘s book. That might sound a little too derivative, but we actually thought Horn was pretty cool in our review. It wasn’t perfect, but it had a lush world to explore, an interesting story to follow, and pretty satisfying combat.

Earlier today, Zynga released a free version of Horn, simply titled Horn Free (Free). It offers the prologue of the story campaign to play through as well as an endless IAP-packed “Quest" mode, which was also just added to the full version of Horn via an update. The Quest mode is interesting as it puts you through a short journey with a huge set of mini-missions to complete, similar to Jetpack Joyride and many other games.

As you complete them you’ll earn credits to put towards upgrading your weapons and gear, and once the journey ends you start right back at the beginning again and work your way through a more difficult version of it. This continues on like a survival mode with harder and harder journeys as you complete each previous one.

Disappointingly, what this new free version and the latest update to the paid version of Horn don’t offer is native widescreen support for the iPhone 5 and 5th generation iPod touch (which is doubly weird because they’re using misleading widescreen screenshots in the App Store). Also, Horn still doesn’t run very smoothly on any of the devices we’ve tested. It suffers from severe stutters on my iPad 3, which is understandable to a degree, but it almost runs worse on my iPhone 5, with tiny frame skips and freezes when you can tell things are loading in the world. This I can’t understand at all.

I’m all for developers creating free versions of games so that they can reach a wider audience, but in this case I wish Phosphor would have spent their time on improving the overall experience and working on the badly needed optimizations for the latest hardware instead. It does state in the description that those types of changes are coming soon, but after all the talk in our forums about how this was supposed to be a premium gaming experience, something about Horn has always felt rough around the edges to me. It’s too bad because I want to like Horn more than I currently do.

At any rate, if you’ve been curious about the whole Horn thing you should definitely give the new free version a try. It gives you a good taste of what you’re in for with the full version campaign and the endless Quest mode is pretty cool too. It does make us wonder though, what happened to the control improvements and what did Phosphor do with all the feedback they collected? It seems like those sorts of things should be higher priority than a free version no one (save possibly Zynga) asked for.