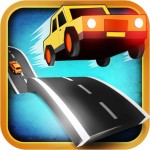 Considering how cramped the endless genre feels on iOS, new entries have to try pretty hard to distinguish themselves from the pack. Some titles try to wow with unique art styles, while others focus on improving the actual gameplay experience (while the best games accomplish both). Chillingo’s Endless Road (Free) squarely falls in the former, with a great visual presentation that certainly feels unique. However, a relatively basic gameplay experience coupled with a somewhat onerous IAP scheme may leave players wanting more.

As far as endless runners go, Endless Road doesn’t deviate much from the norm. Players drive their vehicle across a three-lane highway with the goal of getting as far as possible in a single run. Meanwhile, vehicles and barriers (such as pits, walls and so on) litter the lanes, requiring you to maneuver between the lanes avoiding traffic. Coins can also be collected during a run, allowing players to purchase new vehicles, color schemes, and power-up in an in-game shop. Each run is comprised of ‘stages’ which give players the opportunity to choose which routes to go to at the end of each, which is a neat way of adding some player choice in an otherwise random setting. 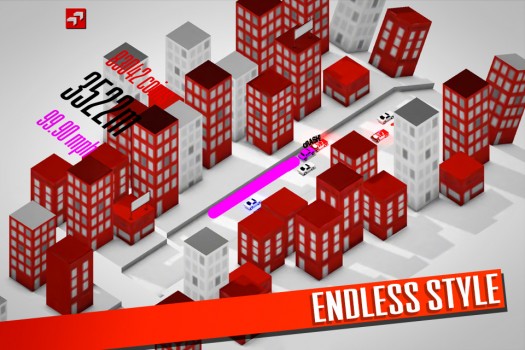 One wrinkle in the traditional gameplay formula is the emphasis on speed in Endless Road. The road is continually collapsing behind your vehicle, forcing you to keep your vehicle’s speed up. Anything above 80 MPH is safe, while falling below that means that the road collapsing will eventually outpace your car, ending the run. Meanwhile, going above 80 MPH gives you some wriggle room but your speed will take a tumble if you hit vehicles. Red and grey arrows are also found on the road, with red increasing your speed and grey decreasing it. 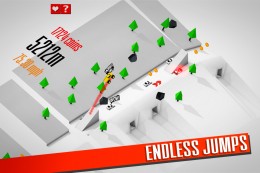 Another interesting facet about Endless Road’s speed mechanism is the careful balance players must have between speed and slow arrows. While folks will obviously want to keep their speed above 80 MPH as much as possible, the game also seems to penalize folks that go too fast. Stay above 80 for an extended period of time and you’ll find yourself nearly outpacing the generation of the road, making it extremely hard to dodge oncoming vehicles and barriers. While I can see how this may add to the strategy of a run, I still found it particularly frustrating.

In addition, another frustrating aspect of Endless Road is the simple fact that it feels too basic. The use of a three-lane style of movement (as opposed to say, five-lanes) takes away a lot of the strategy involved with having more choice of movement. In addition, a lot of runs in Endless Road seem to end up with you making a mistake or two and watching your run slowly end because of the lack of any speed-boosts in the vicinity. It sounds strange, but I’d rather have a run end quicker rather than a prolonged death throe on the hope that I can somehow salvage it (which almost never happens). I’m also not a fan of the currency system, with vehicles and color changes costing far too much without resorting to IAP.

As mentioned earlier, Endless Road’s most impressive quality is its visual style. Employing a scheme that feels both futuristic and minimalist at the same time, Endless Road has a lot of vibes reminiscent of Wipeout. This sort of motif even extends to the little details, whether its the way the road seems to rise up and collapse during a run, to even the game menus. The isometric view does lead to an occasional blocking of the lanes, making the game more difficult than it already is. However, I’m still a big fan of the art style and it certainly does what it can to carry the game as a whole.

My only concern is I don’t think that Endless Road’s visuals do enough to carry the game to lofty heights. Sure, the game looks and sounds great, but the three-lane style of play and supplemental upgrades/power-ups feel pretty basic and somewhat mundane. As it stands, Endless Road is still worth a try for endless aficionados based on what it does well, but I have doubts as to whether it’ll become your long-term endless game of choice.