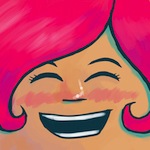 This afternoon, Jared and I checked out Girls like Robots, the next big thing from Adult Swim. In brief, it’s a whimsical tile puzzle game about seating arrangements. In general, winning conditions boil down to satisfying every tile. Girls like robots, but they don’t like nerds. Nerds like pie, but robots don’t. Loner girls are “meh" when placed next to character tiles, but light up when placed next to ladybugs.

The game’s campaign is split up into three acts, each with around a hundred puzzles. You would figure that the scenario design would suffer for this, but that’s the thing: Girls Like Robots constantly mixes up its core action, introducing neat twists at every bend. We’ve got a sampling of this below:

This is definitely a game you’ll want to grab tonight, even if you’re just vaguely into puzzle games. The look, style, and the oddly satisfying premise are way too cool to pass up. We’ll have more on the game soon, as it worms its way around the world.