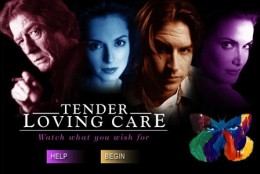 Developer Trilobyte Games, who most notably released the classic adventure title The 7th Guest (Free) to the App Store a couple of years back, is bringing another old-school interactive adventure to iOS this week. It’s called Tender Loving Care and it was originally released by Aftermath Media back in 1999. It promises an interactive movie experience unlike anything else out there, with a near-infinite number of possible plot outcomes based on how you interact with the game. Check out the trailer to get an idea of what Tender Loving Care is like.

There’s still a very “90s CD-Rom game" cheesiness to Tender Loving Care, which is to be expected from a 13 year old game, but you can see that the production values and work that went into bringing a movie to this level of interactivity really surpasses what I’ve seen from similar games over the years. If this has piqued your interest, then look for Tender Loving Care to hit the App Store tomorrow on October 9th, which might actually mean as early as 11pm EST tonight due to the usual time zone release wackiness.