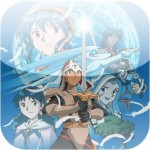 If you were into Lunar back in the day, or if you wanted to get Final Fantasy Dimensions (Free) but it was just too rich for your blood, stop reading and go get SoMoGa’s iOS port of this JRPG classic right now.

Seriously, go, get on, shoo…. ah, wait a bit. The port isn’t flawless.

There are three things that might get in the way of your enjoyment of this classic: the interface takes some getting used to, the anime is dubbed into English, and there seems to be a slow memory leak in the code.

That last one is scary, but it takes a long time to become a problem: about an hour of play on my 4th gen Touch, more like two hours on an iPad 2 (according to the forums). The result is a gradual slowdown/stutter of gameplay that gets progressively worse if you let it go. 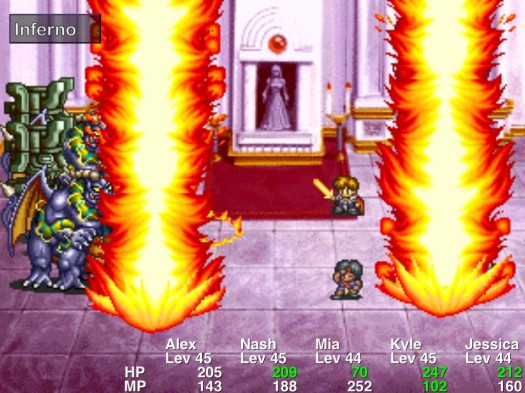 The game lets you save anywhere, and any time but in the middle of combat, or this could be a real nightmare. A quick save, force quit and restart of the app took me less than 30 seconds, and doing that once an hour was no real obstacle to my enjoyment of the game.

Still, something that would be a rarely-noticed bug in a more quick-play game is annoying in an epic RPG, and Lunar is epic, the kind of epic that you can and will play for hours straight. Worse, a few players are reporting severe problems, finding the game to be unplayable as a result.

For me personally, the quality of the dubbing was the biggest flaw in the game, but I hate dubbed anime almost as much as I hate white chocolate. I suppose the overdubbed English performances are reasonably competent, but they sounded like so many hammed-up fingernails on chalkboard to me. To be fair, there has never been a port of Lunar with Japanese audio and English subtitles. 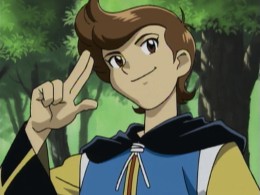 If you’ve played any of the game’s previous incarnations, the menu system will be familiar. If not, save yourself a little pain and read the games short and succinct help file. The controls also take a little getting used to: there is a touch-anywhere virtual stick and a tap-to-move feature, as well as the somewhat bizarre option to play in portrait mode with half the screen taken up by a fixed d-pad.

That’s a nice range of options, but none of them work perfectly. The tap-to-move feature has terrible pathfinding, pulling off “L" shaped moves most but not all of the time, and almost always failing at “U" turns. The stick is sloppy, feeling a bit like Cthulhu Saves the World’s ($1.99) original swipe-to-move scheme. In portrait mode everything is eyestrain-inducingly tiny, but I used it occasionally for precision’s sake in battles and in the menu screen.

The thing is, despite these flaws, I am totally in love with this game.

The game’s protagonist is the classic boy-with-potential, but he comes off as a lot more real than most such protagonists, partially because of Nall, who might be thought of as Alex’s daemon. Luna, his childhood friend, predictable love interest, and party cleric is similarly based on a cliche, but has a surprising amount of nuance to her character. She’s tragically insecure, but that insecurity comes across as a character flaw you want to see her overcome, rather than a convenient subordination to the game’s protagonist. 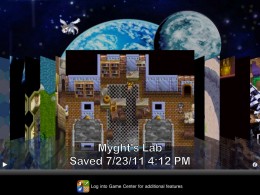 A large part of Lunar’s appeal hinges on the likability of it’s characters. They’re all built on cliches, but they tend to outgrow their cliches and become surprisingly “real." A pervasive sense of humor serves to make major and minor personalities more human and rounded. That sense of humor gently introduces diversity and moral ambiguity into the game. A good example of this is the way that ordinary people (minor NPCs) have wildly varied opinions of people and places, and generally with cause.

The game’s environments are varied and visually appealing, but after the storytelling, Lunar’s big draw is a strong encounter and combat system.

The encounter system strikes a balance between action and turn-based RPG that works well: mobs appear on the map, and you can fight them all try to avoid them in real-time. Battles are turn-based and about as strategic as you can get without a grid or hex map, with movement factored in, and a balanced range of skills and spells to use. There’s relatively little grinding and relatively little benefit to grinding, as boss fights scale to your experience level. 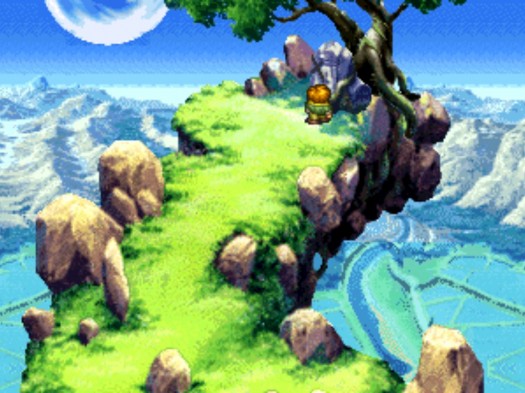 SoMoGa’s port of Lunar was designed with pick-up play in mind. The ability to save anywhere, an auto-resume feature, and a shake-to-pause feature are all mobile-friendly. The handling of system options could be better, as shaking isn’t well documented (I found it by accident) and the only way to get back to the menu is an option in the pause dialogue.

SoMoGa has plans for iCloud multi-device saves, and the devs have dropped hints about adding the Japanese audio (with English subtitles?) and other extras to future versions. One can hope that they’ll root out the slowdown bug as well.

Like so many games these days, Lunar: Silver Star Story Touch hit the App Store with some some obvious flaws. The ultimate question isn’t what it might become, but whether it can be recommended as-is. The short answer is “yes."