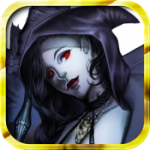 Square Enix’ Guardian Cross (Free) is exactly the game it wants to be. Coming from me, that would usually be a compliment, but in this case, it’s more of a sigh and a shrug.

I’m not categorically opposed to free-to-play games. Agharta’s Shufflepuck Cantina came out at the same time as Guardian Cross and has an unobtrusive IAP model combined with strong core gameplay. A few years ago, I was hooked on Alteil, a game that looks a little like Guardian Cross, but plays more like Magic.

Guardian Cross does not play anything like Magic or even a strategic RPG. It’s a card-battling game where battles are completely non-interactive, and deckbuilding is so obvious that there’s a button to do it for you. The English release of Guardian Cross feels calculated, like a decision on Square Enix’ part to claim some of the cash raked in by “Japanese style" social games like Rage of Bahamut (Free). 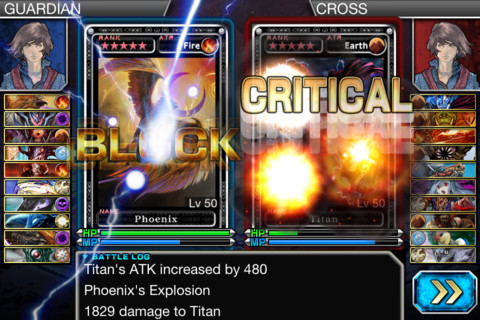 Guardian Cross has the whole package: monster hunting (gotta catch ’em all), highly-tiered rarity, sacrifice-based experience, passive no-loss PvP, timer-based action points, log-in bonuses, ticketing of necessary activities, aggressive social integration, artificial limits on everything, and card art with big breasts (and/or roaring monsters). To be fair, the art is actually very well-drawn, solidly up to Square Enix standards, and less ridiculous than some but it still falls squarely into the fangs-and-cheescake genre.

Guardian Cross‘ advertising copy promises the ability to play the “entire" game without spending money, and this, to Square Enix’s credit, is basically true if by “entire game" you mean the story/campaign, and neither a complete collection of monsters nor any success whatsoever in the PvP coliseum. There’s also the fact that the story isn’t up to Square Enix standards. It has something to do with old gods being reborn as “Guardian Monsters," and I guess that explains why you shoot them and then they fight for you. The plot is implausible, the characters are dull, and the world feels incomplete. 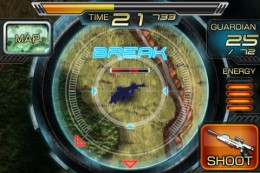 Completing story mode battles with a second-string “deck" is made possible by the fact that losing just means that you can fight the same enemy again, and while your Guardians come in fresh, monsters you damaged or KO’ed last time stay down. This means that you can grind through any enemy in story mode, it just costs you “Action Power" for every attempt. Action Power regenerates slowly over time, or your gauge can be refilled with a “potion" (available in limited supply or purchasable with virtual currency).

That is how Guardian Cross works. You need a lot of different resources to play (too many to list here) all of these resources are rationed according to real-world time as well as in-game actions, with the most useful items (like “Special" Hunting Tickets) very scarce indeed). So playing for free means a lot of waiting punctuated by playing at strategically timed interviews.

Of course, all of these resources can be directly or indirectly unlocked with virtual currency, and that coin costs real dough. One of the things that Guardian Cross has going for it is that it’s very playable in bite-size chunks, but that very advantage means that you’ll want to play at times when you’ll lack AP or GP or tickets. 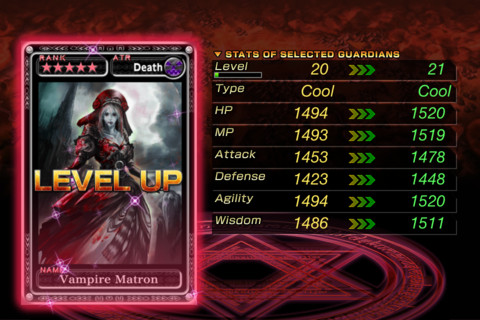 The game’s biggest problem, however, is its core gameplay. This comes in three parts: hunting, deck management, and battling.

The hunting minigame is basically “Big Guardian Hunter" as you line up a scope with silhouettes (so you can’t tell if you’re trained on a rare Guardian) then shoot, then attempt to scroll after the fleeing creature using controls so bad it must be intentional. The hunting minigame remains palatable because of the occasional high-rarity “kill," but wouldn’t last 30 seconds as a stand-alone game.

The deckbuilding component seems interesting, as you have the chance to build a battle order, thinking about elemental advantage and the effects of your Guardian’s special abilities on the enemy. Except that it doesn’t work out that way. You enter all battles blind (except when re-fighting monsters you failed to beat the first time in story mode), so preparation for a specific enemy is irrelevant. Combo-building is also irrelevant, as base stats trump element and special abilities in overall impact. You never want to level up a weaker monster for it’s special abilities. Oh, and your Guardians don’t gain XP for winning battles, just when you sacrifice other cards to them, so you’ll want to sacrifice nearly every card you’re not using in your “party." 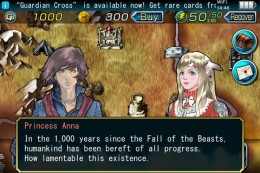 Then there are the battles. The best thing that can be said about the battles is that you can put your device down and go do something else. You won’t however, because you’ll be there holding down the “fast forward" button. There is no “skip" button. Neither is there any interaction whatsoever. With fast-forward held down, you can get through a battle quickly, but it still feels like the game is just wasting your time.

If you’re into loosely Yoshitaka Amano-style art, or if you’ve ever said “y’know, I really wish Silent Scope was more like QWOP," Guardian Cross is worth your time. And if you’re just into these kinds of games, it’s not bad – but neither is it revolutionary. Otherwise, Guardian Cross has little beyond the illustrious name of it’s developer going for it.