It’s not that hard to find a block puzzle game on the App Store — especially if you’re looking for one that’ll test your reflexes while it batters you with psychedelic sounds and lights. Slydris, which hits this week on iPad for $1.99, is different. It keeps the pace slow and rewards patience, and its presentation won’t make you feel like you’ve just gobbled down fifty hallucinogenic mushrooms at the same time.

The goal of Slydris is to slide multi-colored blocks into clean and unbroken lines that stretch across the playing space. As you construct lines, random blocks will fall from a queue at the top of the screen and into the actual playing area.

Each singular movement of a block sends another random line down, regardless if you’ve matched anything. This point of design is what informs the game’s ponderous pacing. Do too much, and you might get burned.

We asked Luke Schneider of radiangames, the game’s creator, to give his take on several of Slydris‘ constituent parts, including its pacing. 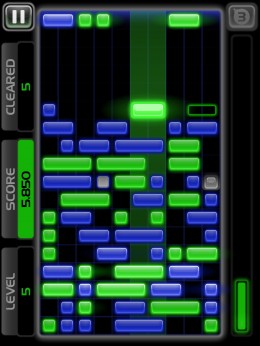 “In Infinite mode, I wanted you to be able to go at your own pace. So you can take as much or little time as you want to make moves. I think that makes it a great mobile-based game because you don’t have to give it your full attention. You can stop and do something else, and come back to it at anytime," Schneider tells us.

“I’ve noticed some people take a lot of time to make their moves, trying to look for the ‘ideal’ move, but in reality it doesn’t matter too much. As long as you make a move that’s relatively intelligent, things will usually work out."

“You can spend a lot of time trying to set up large combos, or try to keep the stack as low as possible, or focus on getting color bursters. It really depends on how people want to play. There are so many potential moves available — and potential moves beyond the immediate ones — that it can be overwhelming, but hopefully people will just dive in and play and start seeing more patterns the more they play."

As you go deeper and deeper into Infinite Mode, you’ll start seeing special blocks, all of which can have devastating effects on your game. For instance, there are greyed out blocks that can’t be moved by the player. A brother to this block is the magnet block, which can only be slid once. Schneider tells us that these are, particularly, dangerous and should be destroyed as quickly as possible.

There are three modes included Slydris. There’s Infinite, which we’ve been talking about and there’s also a Zen mode and a Survival. Zen is what it sounds like. Survival is more of a frantic mode that has you sliding around blocks as fast as possible. If you’re ever looking for a change of pace, this seems like it.

The game’s trailer that we’ve included below should give you a solid indication of how the game feels and looks. Schneider channeled other puzzle games like Tetris as he was building Slydris for its first launch on PC.

“I’ve always admired Tetris, in both its simplicity and its infinite nature. I came up with the basic idea for Slydris while trying to come up with some infinite puzzle ideas that weren’t straight variants on the idea," he says. This was three or four years ago.

“At the time color-matching games were very popular, so I wanted to stick with more spatial-based logic, and I couldn’t think of any other games, besides Tetris, where the goal was to create rows of blocks."

“I think the basic idea I wrote down was ‘makes rows of blocks, blocks fall with light physics, can be 1-3 pieces wide.’ I knew I’d make some pieces harder or easier to destroy based on how it played, but you can never sort out all those details until it’s more than just an idea."

If you’re really in the loop, you’ve seen this game before on PC. This is another radiangames port, then, so expect the usual: better visuals, some tweaks, and a great interface for touch. radiangames is really, really good at making its games feel at home on iPhone and iPad, but this best work this studio has done so far.

We’ll be checking Slydris out more later when it hits this week.

Oh! And for those of you interested, we’ll be seeing something brand new and iOS-specific from radiangames this fall. Teases! We love them!