The Act ($0.99) is the sort of experiment I’d love to see more of. It is, at its heart, a short film, one that’s sweet and touching and full of emotional resonance. It’s also a game. During key moments of the story you’re given the ability to interact, swiping left or right depending on how you want to proceed. But it’s not a Choose Your Own Adventure sort of thing: in The Act, you’re controlling emotions, not (usually) actions. If you can keep up the act, as it were, you’ll win the day.

As an interactive film, The Act works well. Scenes that might go by in a blink gain more weight when the results are in your hands. But as a game it’s a little less successful. The stakes are low, the experience is quite short, and the interactivity is as often frustrating as it is original. When you have to question whether the experience would have been best with or without any interaction at all, it’s hard not to question if The Act is best suited to being a game at all. 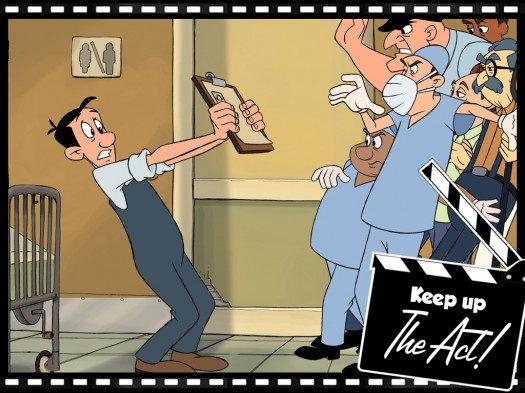 The story of The Act is a charmer. Edgar, a humble window washer, spies out a gorgeous nurse while performing his duties at the hospital. He dreams of a world where he could be suave and smooth and win her over, as much of a pipe dream as that may seem. But while he dreams he stumbles in his work, bringing down his boss’s wrath and setting off a chain reaction that could see him winning the girl of his dreams, or could cost the life of his brother (and coworker) Wally. 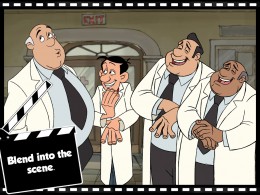 All of this plays out in gorgeous animated scenes. No complaints about the atmosphere; The Act feels like nothing less than playing through a traditionally animated short of a very high caliber. The visuals, the sounds and music are all top notch. Or at least they are before the interactive segments kick in.

Whenever Edgar needs to perform particularly well, the game switches over to give you control. During these scenes, the game’s look takes a pretty big hit in the crispness department. Even so, it manages to stay fairly elegant while you fumble around on screen. And fumbling it is. The Act calls you in for what is, arguably, one of the harder tasks that modern games keep requesting we manage: responding to the body language of the characters on screen.

To be fair, the artists have done a fantastic job of setting up the cues. In one early scene, Edgar needs to fit in with a group of doctors. You can slide your fingers right to make him bolder, and left to make him more timid. To succeed, you’ll need to figure out when you should nod along seriously and when you should switch to boisterous laughter. The doctors that surround him help telegraph the actions he should be taking, though, so fitting in isn’t too steep a challenge. 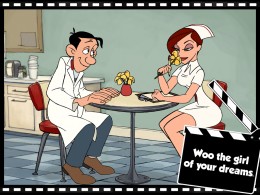 Or, at least, it wouldn’t be a huge challenge if the controls weren’t so incredibly fussy. The distance between a chortle and a knee-slapping guffaw is only a slight finger twitch, so most of your failures will be caused less by misunderstanding how you’re expecting to behave and more by leaning a bit too hard in one direction or another at the wrong moment. Each time you fail, the game rewinds to give you another shot, up to three in a row before you’re presented with the option to continue and a vague hint about how you ought to proceed.

This is where The Act feels least like a proper game. Failing and continuing does absolutely nothing. A funny scene might play out if you fail, but you don’t continue along with the consequences of that choice, you just hop back a few seconds and try again. Continuing starts you from the same moment retrying does, the only difference is how you end up ranked at the end of the whole story. The game offers a suggestion that you should play again to improve your score, but there’s really no reason to do so. You aren’t ranked on a leaderboard or anything, and the scenes play out the same way each time.

React Entertainment has brought something really special to iOS with The Act, and I’d love to say that it’s completely successful. It isn’t, quite. If you’re expecting the next Dragon’s Lair ($0.99) or a long and satisfying roleplaying experience, you’ll be disappointed. But The Act is a game that deserves a little generosity. It’s a beautiful, well-told story, and an experience that isn’t like much of anything being made today. It’s worth a look for the sake of novelty alone. And while I can’t say they’ll all live happily ever after, winning your way through the game’s brief tale is a satisfying experience on its own.