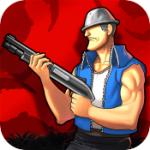 It’s been nearly three years since we checked out Boom Brigade ($2.99) and even back then we appreciated its ability to offer a decent action experience with strategy elements and an incredibly simple control scheme. With Boom Brigade 2 ($2.99), 10ton seems to have upped the ante with more levels, units and weapons. It all leads to an improved title and a great addition to the iOS strategy lineup.

For those unfamiliar with its predecessor, Boom Brigade 2 is a mission-based tactical title that’s best described as a combination of tower defense and real-time action. Each mission charges you with defending a structure with a predetermined number of units from five possible classes, each with their own weapons (Sniper, Flamethrower, Machine Gunner, Shotgunner and Bazooka). You’ll be defending against waves of enemies with various attributes and weapons of their own. At the end of each mission, you’re scored and assigned a rating based on how well you defended your structure and kept your troops alive. 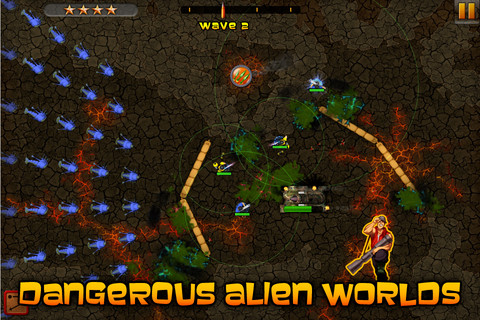 You control your troops almost exclusively via a line-drawing mechanic. A simple touch and drag from your soldier to the location you want them to be at directs them to move. Each unit also has a shooting range and will automatically attack any units within it (you can also tap on specific enemies to focus fire, if you wish). Thus, the majority of the gameplay in Boom Brigade 2 focuses on micromanaging each unit by moving them within shooting range while simultaneously keeping track of their health ammo. While this sounds simple enough, there’s a lot going on behind the scenes that make each mission engaging and fun.

One of my most favorite aspects of Boom Brigade 2 is how deceptively deep the gameplay seems to be. A lot of the upgrades for each unit are actually viable, and it’s quite fun discovering what combinations work on which missions. Upgrades affect everything from power to range to even reload speed (weapons are automatically reloaded when empty). There are also a lot of different strategies that can be utilized for taking out the opposition, with turtling working well on some levels while others force you to balance protecting your base with charging forward and taking out enemies that cause more damage from afar. When you add in the random elements of power-ups there’s certainly a lot to take into consideration. 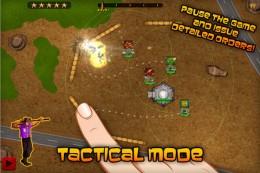 I place so much emphasis on Boom Brigade’s strategic elements because you’ll find a need to embrace them in order to succeed – especially at later levels. The campaign does a pretty decent job with its difficulty curve and introducing new weapon upgrades, but eventually the challenge ramps up and you’ll find yourself actually needing to pay attention to enemy types and matching up weapon upgrades to  your opposition and tactics. The survival modes, meanwhile, significantly ramp up the difficulty and are a nice change of pace to the somewhat slower, more structured enemy waves found in the campaign.

One of the few issues we noted in the original Boom Brigade was the potential for issues on the small iPhone screen. Unfortunately, those still persist somewhat, but the inclusion of tactical mode, which pauses the game when you’re directing your troops, is a good inclusion that attempts to alleviate the problem. Of course, this issue is moot while playing on an iPad (by far my preferred device for this game). There’s also not much in terms of replayability once you complete the campaign (survival leaderboard chasers notwithstanding).

You won’t be blown away by any of the auditory or visual elements in Boom Brigade 2, but in all honesty that’s not what this game is about. Rather, Boom Brigade 2 focuses on a real-time strategy experience with loads of weapons and explosions. On this front, few people will end up unsatisfied. Fans of the original, and really anyone that wants to engage in a little alien annihilation, need to check this game out.