It’s been over a year since we last heard anything of Total Toadz (Free), but the tiny team at Phoolish Games has finally come through. Glad to see it, because I’m really enjoying my Total Toadz time. I haven’t been into edu-games since shortly after Reader Rabbit hit the scene, so trust me when I say that it’s not the math game it appears to be. You’ll need a basic grasp of numbers to excel at it, but it’s really a frantic high-score chaser in education’s clothing.

So here’s how it works. You have three toads on the bottom of the screen, and a bunch of flies coming down from the top. You swipe up from your toad of choice to eat the flies, but the critters are all polarized. Eat a positive fly with an negative toad and it will subtract from your score. Eat a negative fly with a positive toad and the same thing will happen. It’s not so much a matter of math as a matter or matching orange to green and green to orange. When a toad eats a fly it will swap polarities, so you either need to find it an appropriate new target or tap it to switch it back. 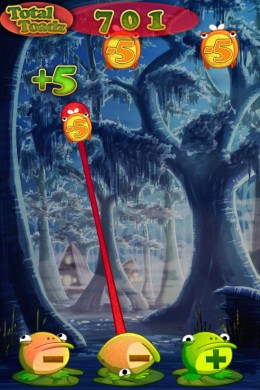 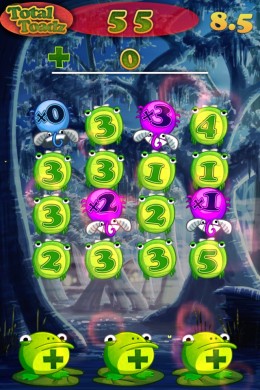 Every so often, a special bug will fly by. Some are multiplication bugs, which take you to a timed mini-game. Eat all the flies you can without hitting the multiply bug and you’ll earn a bonus for what you eat. If you’re following the math, you’ll know to time the multiplier bugs for late in the brief bonus round. Then there are the division bugs. Eating these is a bad idea if you’d like to keep your score from getting cut down. Or maybe they’ll divide it by 0—ever heard of divide by zero errors?

In theory, you could keep eating flies all day no matter how poorly you’re managing your score. But the game gets faster and faster as you play, and if even one fly dips below, the whole thing is finished. Though you’ll be relying a lot on your reflexes, it’s hardly a no-brainer. But if you want to make things even more complicated, try competing on the second leaderboard: how deep you can get into negative numbers.

The thing that keeps me coming back isn’t the mathematical action, entertaining as it is. It’s the packaging. Total Toadz has gorgeous art, with great animation for the critters and a detailed backdrop. The music, a jaunty banjo track, fits perfectly with the swampy stylings. There isn’t much out in the App Store that looks or sounds much like Total Toadz, and that helps make it a nice little treat.

This is a pretty simple game—the high score chase is great, but there’s not much else to it. Leaderboards and achievements will only take you so far when you’re used to unlockables and missions and all that jazz. Me, I’m happy for the simplicity. Not every game needs to have enough content to fill my every waking hour, and Total Toadz makes the time I put in feel worthwhile. It’s not terribly mathematical, but the extra little bit of thought the game requires makes it a more filling meal. If you’re holding out for something more complicated, it sounds like there are updates in the works—keep an eye on our discussion thread if you want to hear more.