Chillingo and PowPow Games take to the skies in Tiny Plane (Free), a game starring an adorable canine pilot. While this endless runner doesn’t do much innovatively, it’s still a great little title with all the right pieces and enough features to be well worth your time.

As expected, gameplay in Tiny Plane is exceedingly simple. Tapping on the left side of the screen makes the plane go up, while a tap on the right side starts a descent. While I think the default control scheme works great, Tiny Plane throws in a couple of extra control options just in case. You’ll be guiding your plane through an endless obstacle run where the goal is to simply get as far as you can while collecting coins and earning the highest score possible. As you get further into a run, Tiny Plane will let you know when the difficulty or speed goes up (a nice feature). 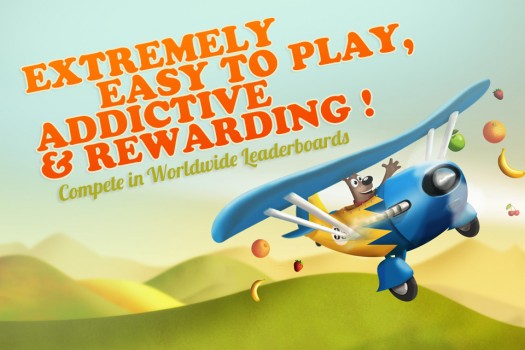 Tiny Plane throws a few extra variables at you to make the experience a bit more interesting. Every second spent flying depletes a gas gauge at the bottom of the screen. When you get near empty, gas station runways are randomly placed on the ground, ready for you to make a quick pit stop to refuel. Having to keep your eye on the gas gauge and periodically land to refuel is a simple twist to the standard endless runner formula that becomes very important the longer you survive a run.

Meanwhile, you’ll be flying through an environment that simply looks beautiful. Tiny Plane employs a visual style that seems to mimic Tiny Wings, with rolling hills in the backdrop that have a hand-drawn look (although the color palette isn’t as vibrant) . The overall lighthearted feel extends to the game’s music, which has a carefree tune and just feels appropriate. One minor complaint is the lack of any diversity (both in backdrops and music), but for the most part it’s a minor concern. 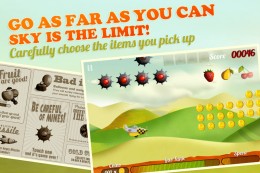 Other features that come into play in Tiny Plane are a variety of power-ups and hurdles. Power-ups range from fuel freezes to fruit that makes you go faster, to speed rings that give a quick burst of speed (and score) when you fly through them. Meanwhile, air mines and heat-seeking missiles are your biggest enemies, along with weights and balloons that lower and raise the altitude of your plane uncontrollably. There’s a lot to keep track of, but it gives Tiny Plane a lot more variety than other standard endless runners.

One nice addition to Tiny Plane’s repertoire is multiplayer. The game exchanges its endless mode for a finish line and you race against three other people, all with the same power-ups (and obstacles) in single-player mode. While I loved multiplayer, the actual experience can be a bit unstable due to some issues with connecting with folks via Game Center. When you’re actually playing, you can see your opponent, but his plane can appear to be all over the place making it hard to figure out how far ahead you are. Also, I’m disappointed that there aren’t any permanent stats stored in multiplayer – even a temporary win/loss record for whom you’re playing against would have been nice. Still, when you get a full multiplayer game going, it’s fast, frenetic fun.

Even though there’s no IAP, I feel that Tiny Plane could have spent a little extra time tweaking their coin system. Planes cost a good deal, and you’ll find yourself having to play for hours just to save up enough coins to purchase one plane, much less all of them. Thankfully, you can pick up a powerup in-flight that lets you temporarily ride in a different plane, so at least you can get a feel for them while you’re saving up money.

In many ways, Tiny Plane eschews some of the newer innovations found in recent endless runners. You won’t find any mission or leveling systems, and there isn’t much in terms of actual progression (other than collecting coins, of course).  As such, if you’re looking for a cute, well-done endless runner and you’re not too concerned with longetivity, I highly recommend Tiny Plane.