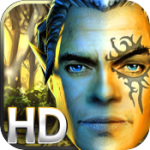 Hey! You! Yeah, you. You loved Oblivion, can’t get enough of Skyrim and all those subsequent “arrow to the knee" memes. You probably wish there was something at least vaguely similar on your phone or iPad, right? Well, there is. It originally hit in late 2010, so you might already have it. If you don’t take a peek at our review:

You start off in Aralon by choosing one of three races – a human, elf, or troll – and from there you further refine your character by choosing its class. Both humans and elves can be male or female and pick from warrior, rogue, ranger, and mage classes. Trolls can only be male and either a warrior or a rogue. Each class has its own skill tree to master as your character levels up, and they all play quite differently from one another giving plenty of reason to play through the game as each. You then customize the look of your character model using a decent selection of hair and face choices, and although the options here aren’t as robust as what you would find in a console game, it’s certainly the most extensive on the iOS platform.

The story of Aralon then begins, and follows a tale of betrayal and a Kingdom on the brink of collapse. As fate would have it, you are the key element to solving these problems and restoring The Kingdom of Aralon to its previous state of peace and harmony. It’s certainly the kind of story that follows clichés of the role-playing genre, but it’s interesting nonetheless and serves as a good motivator to carry on and see things through. …Read More.

Aralon has aged surprisingly well, and for its sale price of 99¢ your cost-per-hour-of-entertainment in this game is down to mere pennies. Give it a look, especially if you’re into semi-open world RPGs. We made an awful lot of noise about Aralon when it was first released, but, I suppose it’s possible there are people out there who haven’t heard about it or still haven’t picked it up for whatever reason.