It’s not easy to make a unique platformer. You either have to be trusty with your design skills and make a game look out of this world and startlingly unique, or you have to have some sort of wizard when it comes to your level design skills. Luckily, the people behind Gunman Clive [$1.99] have a little of both, and it makes for one of the best platformers I’ve played for years, on iOS or any other platformer.

Gunman Clive comes out of the gate shooting with an incredible look, which has a hand-drawn feel and makes you feel as if you are playing a game on the page of a tea-stained sketchbook. As Gunman Clive, you play the rough-and-tough Western hero on a mission to save the mayor’s daughter from wild bandits. Not that any of that matters, because as soon as you get an eyeful of this game you’ll drool a bit and forget any of the storyline in favor of sucking up the pretty graphics with your face. 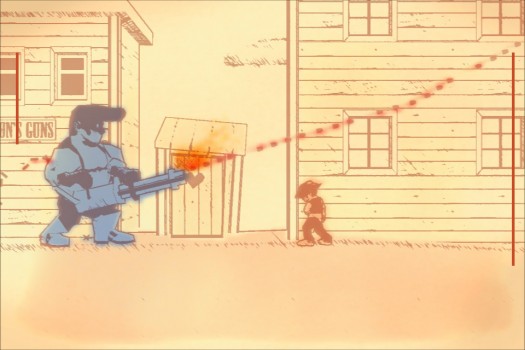 Controls are pretty simple in Gunman Clive — a directional pad on your bottom left and a shoot and jump button set on your right. I wasn’t nuts about the floaty directional pad at first — it felt like my thumb was spending too much time in the middle of the screen — but eventually I adjusted. It’s handy to know you can jump into the menu and change the size of the d-pad or choose to make it static. For me, these small changes made the game much easier to play.

If you have ever played a classic platformer from the NES era, especially Mega Man, you will feel the echoes of them in this game. I giggled the first time I got a weapon drop too — it was a spread gun. If you people are trying to make me relive all those fine old days spent perfecting my Contra runs, it’s working. 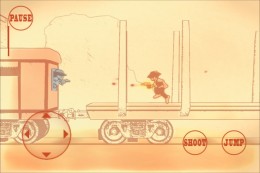 You can also expect excellent level design here, which goes far beyond the basic jumps of most iOS games these days. Physics also come into play, but in a unique way that leaves most of those physics-based titles out there in the dust. And later in the game, you get to ride an actual rocket. Quite the contrast to the good old “Oh, an ice stage… a fire stage … a forest stage" boredom that so many of us are sick of. You won’t be bored with these levels as Gunman Clive keeps it fresh throughout.

One thing you might find, however, is that you may experience some frustration while playing Gunman Clive. That is because it actually is quite challenging. The level bosses in particular will take you some time to get used to. They have that bombastic feel that you don’t get often enough as well — I feel like I’ve played against too many end level bosses these days that don’t feel dynamic at all.

These bosses are hulking mammoths ten times your size, which I personally like. As far as challenge goes, though, I found myself wishing that the checkpoints would come a bit sooner after playing through several particularly difficult parts over and over. Or perhaps, an easy mode? Maybe I’m just out of shape from my NES days.

If you love platformers, you have to pick this beauty up. It really is a standout in all categories. The only possible turn off I can see is the difficulty, but maybe that’s just a fine excuse to bone up on your skills. Get that itchy trigger finger ready and come out of the gate with guns blazing, and you should do just fine.