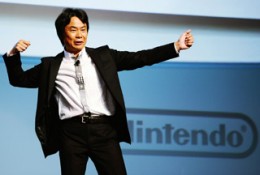 The most influential man at hardware and software powerhouse Nintendo has found at least one phone game he enjoys. Visionary Shigeru Miyamoto recently name-dropped Rovio’s Angry Birds in a conversation with Hookshot, Inc, noting that it’s one of the few phone games he can dig. “There aren’t many games that I’ve played recently that have been truly convincing to me," he said at a Paris event. “That said, I have very much enjoyed Angry Birds — especially the way in which it combines traditional and new game elements in exciting ways."

Miyamoto later praised the surprising depth of the game’s flinging mechanic and the overall simplicity of its design. “Angry Birds is a very simple idea but it’s one of those games that I immediately appreciated when I first started playing, before wishing that I had been the one to come up with the idea first," he said.

Nintendo does its best to totally dismiss the App Store and phones in general, so these quotes strike us as a particularly notable. It’s acknowledgment that something great can happen on our platforms of choice, from the mouth of Nintendo’s visionary designer.

In an interview with Edge at the same event, Miyamoto admitted that he keeps tabs on the mobile space, but noted that Nintendo can be just as creative.

“I check up on them sometimes, but I don’t have a lot of time," he told Edge. “I think we also have a history of having certain fun ideas and making a game out of it, and there’s lots of other people also doing this [now].

“This kind of environment inspires us to try even harder, and create even more unexpected new things."

Miyamoto is in the middle of some sort of slow (and disputed) stepping down process that’ll see him working on smaller games with smaller teams instead of big, blown-up AAA Mario and Zelda titles.

[via Hookshot Inc, via Edge]