I’m a huge fan of rollercoasters. There’s something about the grandiose structures, raw speed and pure adrenaline that just appeal to me. Maybe that’s why I’m such a fan of Madcoaster [$0.99], an endless runner with a rollercoaster twist. Hitting all the major points for the genre, Madcoaster’s interesting premise is enough to put it ahead of other, more generic titles.

As an endless runner, Madcoaster doesn’t add too much to the genre in terms of innovation. Your rollercoaster moves from left to right on randomized tracks with the primary goal being to jump over track gaps and avoid the chasms. Meanwhile, you’ll encounter a wide variety of birds and animals sitting on the track that earn you extra points if you hit them. A few standard power-ups (such as a coin magnet, speed-up, and rollercoaster jetpack) are also occasionally placed throughout levels. There are also plenty of coins to collect, but they only add to the score and aren’t collected for anything else. 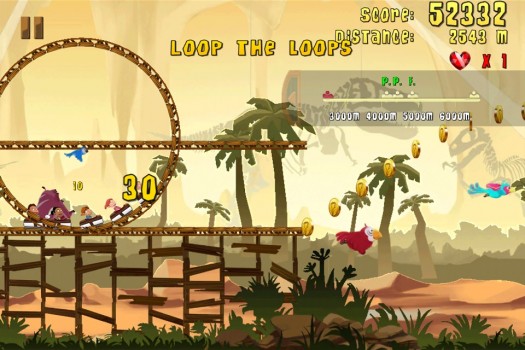 As you progress, the track layouts get more complicated and the rollercoaster (obviously) speeds up. Eventually, the game will end once you lose all your lives, with the game scoring you based on total distance traveled and total points (with leaderboards for both, respectively).

In addition to the standard score chase, Madcoaster also offers a leveling mechanic based on objectives. As you hit all the level’s goals, your rollercoaster gets a visual overhaul and the raw score multiplier goes up. Being able to permanently raise your score multiplier is an interesting feature, but it does take away some score parity and penalizes score chasers that don’t focus on objectives. 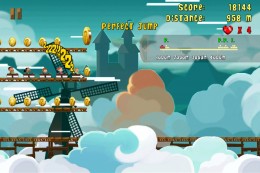 Visuals are cartoony and vibrant, and look great on a retina-iPhone. There’s no retina support yet for the new iPad, but Madcoaster looks fine regardless. While gameplay on both device sizes works well, I did find the iPhone screen to be a bit more cluttered with information than the iPad.

As a rollercoaster-themed endless runner, you’d expect the framerate to be fast and smooth and for the most part Madcoaster doesn’t disappoint. The game does a great job with its sense of speed, especially in the latter portions of a run. I did encounter some minor slowdown on a current generation iPod touch, but for current iPhones and iPads, I encountered no problems.

One area that Madcoaster does well is its colorful and varied backdrops. Every 1000m the rollercoaster enters a cave that serves as a gateway to a new location. Environments include a Halloween-themed twilight grounds, the innards of a volcano, deep within a jungle and even the pyramids of Egypt. Each region also has its own music as well as unique animals and birds, which become important with later objectives.

While the variety goes a way towards addressing the inevitable monotony of some endless runners, not every environment is created equal. Each location has foreground flora and fauna with some actually blocking the bottom rails, making it a bit difficult to time jumps and landings if you’re close to the bottom of the screen. Some may consider it a challenge, while others may find it simply frustrating. Another minor complaint is that some locations are locked behind IAP. However, considering that you can eventually unlock all IAP with a good enough run, I don’t think it’s that big of a deal.

As mentioned above, Madcoaster doesn’t stray too far from the endless runner formula, but it does do a good job executing most of the elements we love in the genre. Combine this with the rollercoaster motif and decent visuals and there’s little reason for you not to at least check it out.  Madcoaster may not have the lasting power of a Jetpack Joyride, but there’s still plenty here for an enjoyable ride.