Lightopus [$2.99] by BulkyPix and Appxplore is an arcade-style title with an emphasis on beautiful environments, item collection, and indirect combat. More importantly, Lightopus does a great job succeeding on all these fronts, particularly in the visuals department.  This success allows players to overlook an otherwise shallow narrative to focus more on basic gameplay.

As the only adult lightopus left, your goal is to enter the abyss and rescue the remaining younglings of your race, also known as bulbies. Gameplay is divided into zones, and each zone has a minimum amount of bulbies that must be collected before moving on. You are free to collect more bulbies to increase your score, but the longer you stay in a zone, the more aggressive the baddies seem to become. Each zone also has optional stars which boost your total score for the zone. Collect enough of them and you can also travel to a special zone with unique battles in which you are on the offense.

While the collection gameplay of Lightopus is engaging enough, the combat serves as the star of the show. Your lightopus can’t attack anything head on, but the bulbies you collect form an army that continually follows you and attacks anything in its path. Combat becomes a perpetual dance of dodging enemies charging at you, and indirectly maneuvering your bulbies until they’re in the path of the baddies. 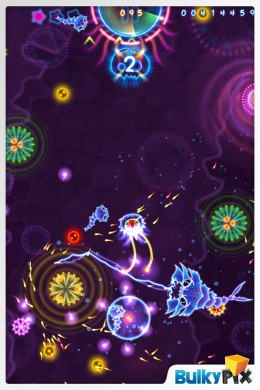 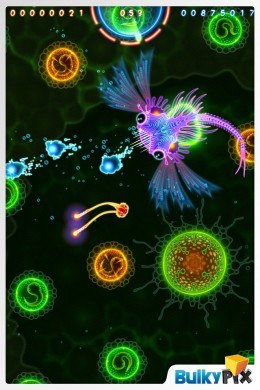 The more your bulbies attack, however, the more you of them you lose, forcing you to balance combat with collection (especially when you encounter bosses that love to quickly kill your poor bulbies). Various obstacles also alter the path of your followers, adding to the strategy of maneuvering. Power-ups are also available to strengthen the bulbies in different ways.

The combat may sound relatively simplistic, but Lightopus does a great job of transforming it into a mesmerizing play of quick movements and strategic planning. The framerate is very smooth, and the path AI of the bulbies just feels realistic. Gamers control the lightopus’ (and thus, bulbies) direction via virtual joystick or tap mechanics. Both work well-enough, although the controls weren’t as tight as I’d like. Still, I find it interesting how well-done combat works, considering that the majority of conflict can be avoided if desired.

Environment-wise, while the abyss may be cruel, it is also a beautiful.  The visuals in Lightopus are a stunning mix of neon colors and constantly moving backdrops that do a great job transporting you into a different world. Graphical flourishes on your lightopus and bulbies are a treat and add to the action. The same goes for the music which features tranquil compositions that can quickly turn dark when you encounter a boss enemy. Every feature adds to a superb overall presentation that just works.

Despite the gameplay and presentation, one area that Lightopus lacks is in its story. Besides the app description and a few cutscenes, there’s very little in terms of narrative. Of course, this hardly affects the actual gameplay, but it does turn Lightopus into more of an arcade-inspired score chaser than a game with an emphasis on plot. I would have liked to see more of a story-mode myself, as I think it would have done the rest of the game more justice.

Still, while the lack of a story may turn some folks off, it may not be that important. The more I played, the more I realized that Lightopus isn’t a game of destinations; it’s a game about journeys. Each play through is a new and somewhat unique adventure through this beautiful world. While some games offer the greatest satisfaction from completing it, others (like this one) are simply a joy to simply play. That’s not to say that I still would have preferred more narrative, but I believe it plays a secondary role to the journey. Regardless, check out Lightopus now, and I hope you enjoy that journey.