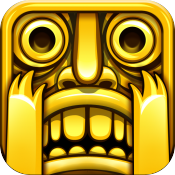 If you’re from outside of the USA, or just don’t pay attention to politics (and who can blame you), I’ll get you caught up to speed on what this is all about: As we get closer and closer to an actual presidential election (which is still nearly 8 months away), more and more weird personal details about all of the candidates come to the surface. This usually has to do with the individual campaigns trying to make their respective candidates seem more likable, or opposing campaigns trying to discredit candidates in some way.

Well, it turns out Rick Santorum, one of the dudes seeking the Republican nomination in hopes to become a United States President, is a huge fan of Imangi Studios’ Temple Run [Free]. In fact, per the man himself, he’s given up Angry Birds he likes the game so much:

Now, say what you will about Rick Santorum, but it’s always crazy (at least to me) to see iOS games, or, hell, video games in general, with this sort of mainstream appeal. I almost wish I could take this video back in time to the mid-80’s when my parents were desperately trying to get me to play less Nintendo so I could be like, “Look, this guy is running for President of the United States and can score over a million in Temple Run."

Actually, they’d probably still tell me to play less Nintendo-I’m sure they’d be impressed by the time machine though.