Fly With Me [99¢] from Electronic Arts may resemble a cute kids game about a flying bird, but it’s not actually as simplistic as it seems. You tap the screen to make the little bird fly and try to collect three stars and reach the birdhouse at the end of the level. This may sound easy, but the catch is you have a limited number of wing-flaps available.

Each time you tap the screen to flap your wings, your flap-meter decreases slightly. Once that meter is depleted, you’ll literally fall out of the sky with an amusing animation as you splat into the ground. So, you quickly learn to be more conservative with your flaps, and glide whenever possible. NOT flapping is a key part of this game. Your flap-meter must also be replenished by eating bees, otherwise you won’t have enough flaps to reach the end.

At the top of the screen is a progress bar. This shows your position within the level, but also marks the location of three stars so you know when to watch out for them. These stars are used to unlock chapters. There’s also one golden gear to collect per level. One you’ve found 45 golden gears a more powerful metallic robot bird is unlocked, or you can just buy it right away as an in-app purchase. 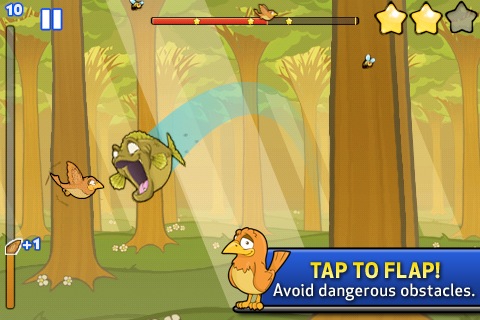 There’s three chapters to play (fields, trees and tropical), offering 45 levels in total. You can play using four different birds, but first they’ll need to be unlocked. There’s also three challenge modes (one per chapter) which are unlocked once you gain enough stars. The challenge levels involve trying to fly as far as possible, and your score in that mode is measured in distance (meters).

Each level contains good winds to ride and bad brown air to avoid. These bad winds might do a loop-the-loop or carry you through an underground tunnel, which is interesting to watch but you can’t control the bird while being blown along. While bee’s are good to eat, the sick bugs should be avoided. As should predators, including big dangling bird-eating spiders, hungry fish and carnivorous plants.

Fly with Me has two disappointing features. First off, the frequent adverts for the games IAP offerings feel intrusive. After a couple of attempts at the same level, a full screen message appeared asking if I wanted to buy a robot bird (no thanks). Slightly later it asked if I was interested in paying to unlock all levels (Err, no thanks). Perhaps I want to purchase the easier kids mode? (No. Thank. You.) Then it starts over, trying to sell the IAP previously declined.

Secondly, the game reports back to EA, sending them data about game statistics, settings, incident or event data and feature preferences. I have no problem with this “usage sharing" functionality, except that it’s enabled by default. If players don’t check the “Info" screen, they may not realize their device is sending out data. I turned this setting off on principle.

Despite these drawbacks, Fly With Me is a solid title that’s more challenging than it looks. The limited flapping mechanic sets it apart from the many similar simplistic arcade games on the App Store, and it’s a good value for a dollar – assuming they don’t eventually talk you into additional in-app purchases.