Sissel has a lot of problems, but the least of  them is that he’s dead. Well, not dead-dead, but dead. I’ll explain: Ghost Trick: Phantom Detective [Free] is all about what Sissel has gained in the afterlife. Like a common ghoul, this guy can rattle mundane objects, activate levers and buttons, and possess stuff. He can also decidedly un-ghoulishly rewind time, which is a trick that comes in pretty handy; a lot of the people he knows tend to die, and he needs these people to help him with his biggest problem: memory loss.

Ghost Trick first saw a release on Nintendo DS around a year ago. This isn’t its debut on iOS, though. A couple of months after the DS release, Capcom dropped a Universal version of the game on the Japanese App Store. Now, the rest of the world is finally getting to see a version of this port tonight. 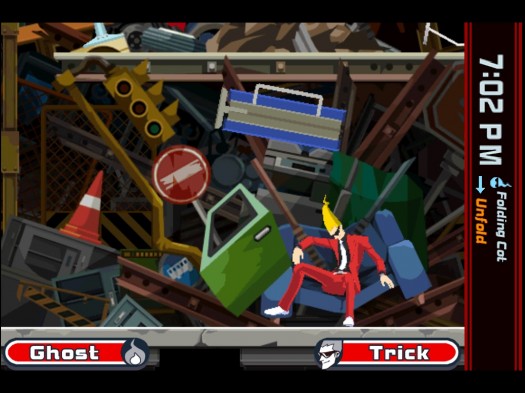 And it seems like it’s OK from a technical standpoint. In my modest amount of time with it, I haven’t seen any port-specific issues like stuttering or flickering. It controls pretty well, too, and caters to your finger just about as well as it did to the stylus.

There’s some stuff still bothering me. The assets aren’t as high of a resolution as I would like. Also, a good sixth of the screen is covered by a thick layer of UI that, it seems, is simply there to keep the pixel density high. It’s weird. 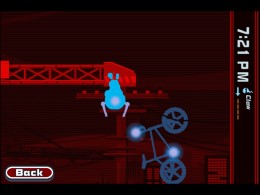 In case you missed out on Ghost Trick, it breaks down like this: Sissel is often charged with reversing people’s deaths and he has to use his powers to do so. Each death is like a puzzle, basically, that has you opening doors, spiritually oozing to adjacent objects, and otherwise setting up Rube Goldberg-ian scenarios that’ll change that person’s fate.

In most cases, you’re watching a death, infesting that person’s body in order to rewind time, and then actively trying to disrupt that sequence. The solutions to puzzles seem to be mired in weird video game logic, but the saving grace here is that there is a single and true solution to every puzzle. You just gotta find it, you know?

I’ve been having a blast so far, by the way. This is a pretty thoughtful, if not challenging game with some insane, but fun-to-discover solutions. And while the minutes of overly long exposition is starting to wear me out, I’m digging the characters and the humor. Just wait until you meet dog, man. Wait for it.

We’ll definitely continue on with Ghost Trick, and try to give you something much more definitive than this in the near future. This is a free release, though — the first two chapters, which take about 60 or 70 minutes to complete, are what you’ll get with a $0 download, so that should give you a good indication of what you’re getting into. Our gut says grab it. Here’s some more screens: 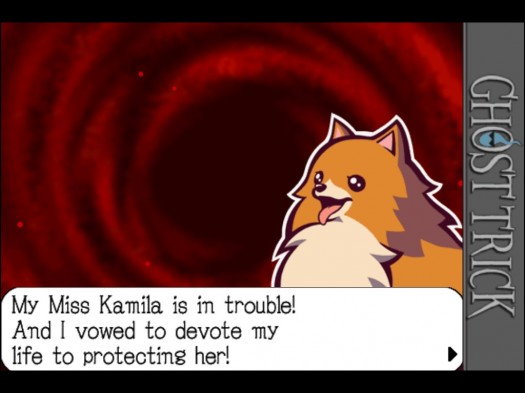 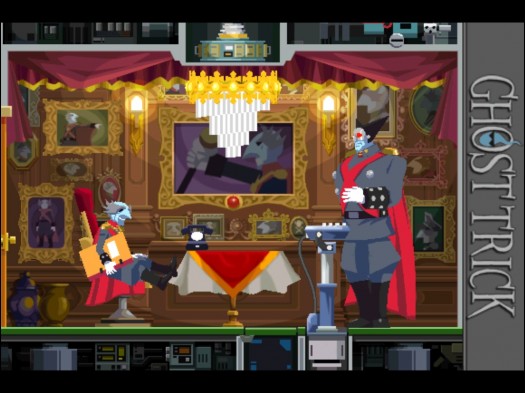 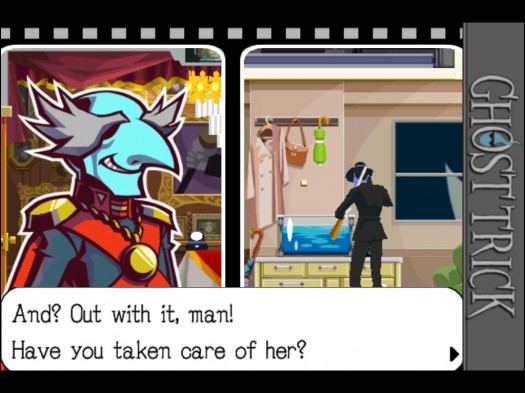