When I play a music game, the most important things I’m looking for are good music and approachable gameplay. Cytus [$0.99] by Rayark manages to nail both of those and even adds a little bit of visual flair on top of it. While Cytus does have a few small issues and miscues in regards to a few elements, it’s still great to play and is a worthy addition to the iOS rhythm genre.

Cytus plays similarly to Elite Beat Agents – note bubbles appear on your screen and must be tapped to the rhythm of the song. An ‘Active Scan Line’ moves up and down the screen to the beat of the song and helps you time the hits on each note. In addition to normal notes, the game also features holds and slides which add some variety to the gameplay. Hits are scored on a system ranging from ‘Perfect’ to ‘Bad’ with a final ranking at song completion dependent on the length of your hit chain and the amount perfect hits.

As you can imagine, the gameplay is pretty simple, but well executed. While the note positioning is mostly done well, there were a few songs where the notes seemed slightly off or not in tune with either the beat or off-beat. There weren’t too many instances of this, but it was still annoying nonetheless. 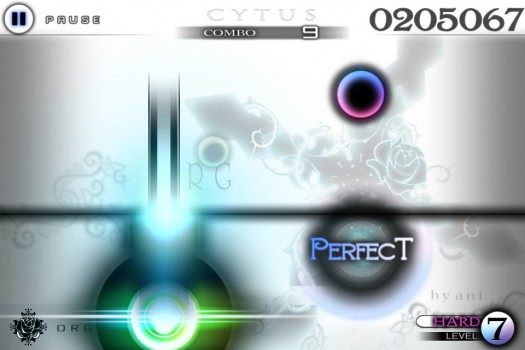 Where Cytus really shines is in its music selection and presentation. Song-wise, players can choose from 15 songs ranging from J-Pop to Techno with a little bit of Synthpop thrown into the mix. The song selection is very much Bemani-inspired and should sound familiar to anyone that has played those types of games before.

While I imagine some gamers may immediately scoff at the music genres I just listed, I’d plead with you to give it a chance. One of the things I loved about each song in Cytus is the approachability regardless of whether you’re a fan of that sort of music. It’s not very often that I play through a music game and I pretty much like every single song that’s thrown at me, which should speak volumes of the care put into the selection in this game. Just make sure you play with some headphones in order to do the music justice. 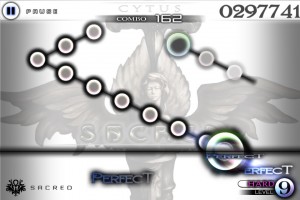 The overall presentation, meanwhile, is one of the more striking aspects of Cytus. Everything has a very clean, minimalistic feel accompanied with some beautiful artwork. It’s hard to explain what in particular is so appealing – maybe it’s because the whole game looks like a modern Final Fantasy-menu. Also included is Game Center support as well as social network integration. There were a few instances where the interface was a little too bare (for example, the tutorial fails to explain the various pop-up mode options), but otherwise I came away impressed.

While Cytus gets a lot of things right, there are a few elements missing that are typically standard in most music games. For example, there’s no ‘life meter’ in Cytus, meaning that you could just simply launch a song, not do anything and still see the level through (technically, you ‘Fail’ the level, but you don’t know until after the song ends). Granted, you actually have to get a ranking higher than the minimum in order to unlock the ‘Hard’ difficulty and new songs, but some of the fun with music games is working under the pressure of an all-powerful meter judging your performance (or maybe I’m just a masochist).

Another weakness in Cytus is in regards to the hit detection. Basically, the hit window is relatively loose, meaning that you have a wide margin of error between what is considered a ‘Perfect’ tap and what is considered merely a ‘Good’ hit (or between ‘Good’ and ‘Bad’ for that matter). While some folks wouldn’t necessarily consider this a bad thing it does decrease the overall challenge, particularly for those of us that are veterans of music games that were rather unforgiving.

Despite these omissions, Cytus still does a great job executing the features it does have. Considering its relative minimalism, I think Cytus is a good title for gamers looking to get into the music genre on iOS devices. I would have liked to have seen more songs, but I’m hoping the developers will add more in the future. Regardless, with a great selection of music, simple but well-executed gameplay, and a good, clean overall presentation, Cytus is well worth a recommendation for anyone interested in rhythm games.