Games like Monkey Quest: Thunderbow [$0.99/HD] disrupt the feel-good media narrative we like to tell about the App Store. It’s a low-risk way to capitalize on experimental games like Sword & Sworcery [$4.99], a place where Andreas Illiger, the one-man dev team behind Tiny Wings [$0.99], can sell thousands of copies. It’s also where a giant corporation like Nickelodeon can sell us an Angry Birds [$0.99] clone to advertise its kid-friendly MMO, Monkey Quest.

It would be easier to find Thunderbow distasteful if it weren’t so radical, born out of the same  mid-90s fever dream that brought us anthropomorphic turtles who were also ninjas. The hero of the game is a nameless monkey who carries a bow-and-arrow. After you beat the 30 available levels — more are, supposedly, coming soon — you can play a few bonus rounds with a girl-monkey who shoots lightning bolts out of her electric guitar-bow. It’s incredible.

My favorite thing about Thunderbow (that name!) is how self-aware and understated it is (those aren’t adjectives people generally use to describe licensed games). Children’s media tends to be overblown and moralistic, full of uplifting melodramas or cautionary tales, but there’s not a word of dialogue or narrative in Thunderbow, only beautifully illustrated storyboards introducing its next enemies. 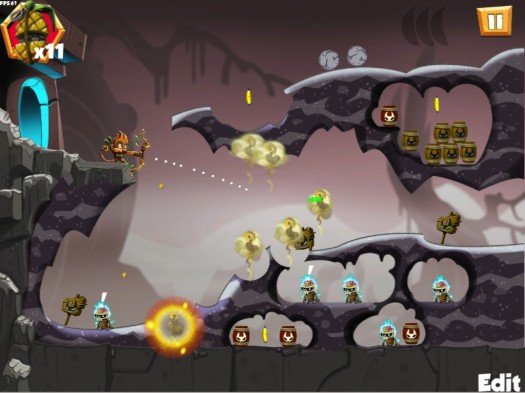 That same type of restraint carries over to the game design itself. Even the MMO overlay — after completing certain achievements, Monkey Quest players can collect new gear — is unintrusive, and Thunderbow seems fully-realized despite the ancillary tie-in. There are no frills here, just one monkey on a quest to squish scorpions with his thunderbow and physics-enabled exploding carrot-arrows.

Our primate protagonist accomplishes this by shooting a variety of ammunition — pineapples that explode like cluster bombs, bundle of mosquitoes that splinters into individual kamikaze dive-bombers, etc. — at exploding barrels and supporting structures. It’s all standard stuff for the physics-slingshot genre, but Thunderbow is so refined and enjoyable that it never feels stale.

More specifically, the levels feel smaller and more compact than the ones found in, say, Angry Birds — none of them are larger than one screen. With the smaller scope comes a focus on precision — lining up Monkey’s shots isn’t a matter of swiping as much as it is small, discrete adjustments, complemented by razor-sharp controls.

As a result, player intent is never compromised — you can see exactly what you need to do, and Thunderbow provides the necessary controls to pull it off. The game rewards patience, precision, and attention to detail, and the levels are compact enough that two or three well-placed arrows will bring the whole house of cards down. With top notch visual and aural feedback, the simple act of crushing a screen full of scorpions with boulders can be very satisfying.

The flipside of Thunderbow‘s precision is that it skews toward being a little too easy. The tough part is finding the chink in each level’s armor, but the execution of your Rube-Goldbergian air-strike is generally straightforward. The levels were tough enough to give me pause — especially because players must collect bananas (three per level) to unlock content — but I never felt frustrated or stumped. It helps that Thunderbow is relatively short:  I plowed through the game in a few hours, before the mechanics and bright colors lost their luster.

During each level, light butt-rock is pumped through your speakers while a monster truck derby announcer growls catchphrases like, “Unstoppable!" and “Mass Destruction!" This isn’t a criticism as much as it is an example of the game’s aesthetic as a whole. It’s the type of game a nine-year-old on a Surge bender would design, but Thunderbow is vivid, imaginative, and well-executed, even if its conceits are well-established by now. It’s simultaneously childish and childlike, but it’s so pure in its vision that I couldn’t help but enjoy it.