Super Crate Box [99¢] finally launched yesterday to a fairly rousing reception. I caught tons of people praising the game all over the Twitters, in our forums, and probably in other social outlets that I’m not even cool enough to know about yet. With no other big releases this week, Super Crate Box has been the talk of the town for the past 24 hours or so, and has in turn been shooting right up the paid app charts, currently sitting just inside the top 40 overall.

But another clever way to see just how many people are engrossed in Super Crate Box is by the “total crates collected" counter on the main menu. Basically, it tallies up the number of crates that have been collected across all players on iOS, or at least the ones that have connected to the internet, since the game’s release. At the onset, developer Vlambeer had said on their blog that if players could grow the total crates collected tally up to 5 million then they would release the first content update for Super Crate Box. 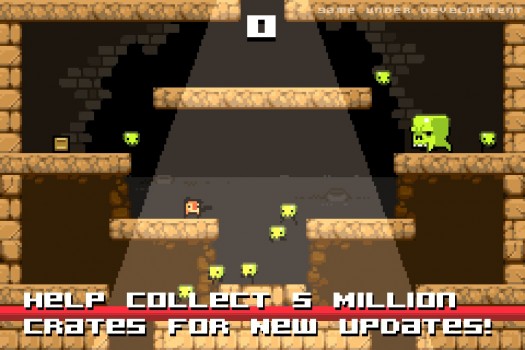 It’s kind of a neat incentive, since we’ve all grown so accustomed to free content updates and most of the time just blindly expect to receive them. True, free updates are one of the coolest aspects about App Store gaming, but I don’t have a problem with having to work for it a bit in Super Crate Box, especially when the “work" is so much fun. Plus, as the counter continues to rise, it gives a pretty good indication that people are still actively playing your game, and that any time or effort you spend on making a content update will be justified.

However, I don’t think even Vlambeer expected that Super Crate Box would be so popular right off the bat. It’s been just over 24 hours since the game has been available and the total crates collected has already surged past the 3 million mark. At this rate, we should be hitting 5 million even before most of us get off work to start the weekend. It really is quite remarkable.

Vlambeer isn’t being very forthcoming with exactly what it is that will be in the 5 million crates update, but so far all requests I’ve been hearing have been for new arenas, new characters, and new weapons. So basically, more of everything. I can’t wait to see what makes it into the first major update.

On a similar note, the game unfortunately launched with a bug that caused it to crash on 3GS devices running certain versions of iOS, and already an update has been released that rectifies this. I’m glad to know that serious game crashing bugs don’t need to wait around for the 5 million crate mark, and am really impressed with Vlambeer’s quick turnaround with that issue. We’ll keep on contributing crates to the grand total on the way to 5 million and the first content update, and you can check discussion on Super Crate Box in our forums until we collectively hit that mark.