As I write, I often consider whether or not my take on a game might be biased. For instance, I am clearly going to adore the idea of a game where I get to pilot a flying catmobile that spits screaming mice at grumbly enemies over a real-time war simulation. On that note, Don’t Run With a Plasma Sword [$0.99] is clearly the kind of game that I gravitate towards — its comic-inspired, it features an alien invasion, I’m basically running around with a lightsaber, and its got that modern retro feeling. In other words, I’m already smiling at the prospect. Biased? Maybe just a bit.

That being said, if a game sucks, it doesn’t get my stamp of approval no matter how many hallmarks of my tastes it contains. I’m happy to report that Don’t Run With a Plasma Sword not only features really cool, kitschy themes and humor, but it’s actually a hell of a lot of fun to play as well.

You play the role of Cornelius in this side-scroller, a comic store employee who is suddenly faced with an alien invasion. What better time than now to fulfill his dream of becoming a hero? And so, trusty plasma sword in hand, he goes bounding through the world taking out robots and saving the world. Not such a bad career, although the pay is more about looking cool than rolling in the greenbacks. 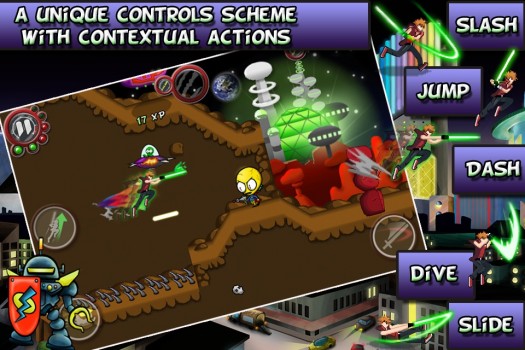 The game is on rails, so your only responsibilities will be to make Cornelius jump, slide and swing his sword as he runs through each level. Doing so is very pleasant as the buttons along the sides of your screen are very responsive, and you’ll lose yourself right into the action as you jam out to the appropriately wacky “alien invasion" music. Each level has lots of stuff to dodge and also lots of cool powerups, which will you give you powers like a shield so you can take an extra hit or a sword powerup that lets you fling a charge attack at the robots.

By adding levels and bosses to the basic endless running formula, Don’t Run With a Plasma Sword turns out a pretty appealing package. As you make your way through the city and the factory levels to finally reach the mothership , you’ll collect stars which give you XP (along with killing enemies and completing levels). When you finally die, you will get a chance to use the XP points you earn to level up your skills, unlock story and endless levels early if you like, or even buying snazzy clothes for your character. This system gives you a bit of a reward after you die, so instead of that feeling of drudgery you get when playing other running games and dying over and over, this one weathers that out well by giving you a little break before you get back to it.

In-App purchases are also an option, but they are in the game in a very low key way (they are accessible in the same menu where you can buy power-ups with your XP). What I liked most about the way this was presented was that you didn’t feel like you were losing out if you didn’t spend real life money, because in the same menu there was all this other stuff to choose from that you could earn from actual gameplay.

Now, that’s just Story Mode. Endless Mode is also available, and adds in little missions that challenge you to run a certain distance or that sort of thing. I had more fun in story mode, but overall I still found this mode challenging and worthwhile as well. Don’t Run With a Plasma Sword is also compatible with OpenFeint, Game Center, Facebook and Twitter, so you pretty much have every way you can possibly think of to share your scores with your friends at your fingertips.

From presentation to gameplay to overall fun factor, Don’t Run With a Plasma Sword simply shines. It’s got distinctive character and a great sense of humor. It’s also a treat to look at — great design, excellent color. Do I sound biased now, or what? Seriously, though, that whole Mars Attacks formula really works here, especially with a dash of comic book inspiration thrown in. I have a feeling you’ll be enjoying this title for some time, and it’ll be one of those that you keep on coming back to.