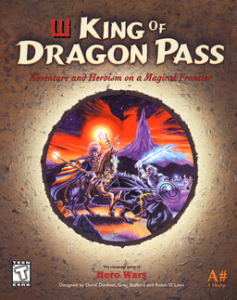 I think the easiest way to describe what the game is all about is to call it a largely text-based menu-driven mash up of a Civilization game and a Choose Your Own Adventure book. If you’re the kind of person who requires flashy graphics, fast action, rock-bottom pricing, and online multiplayer, stop reading now. This is not the game for you. If, however, you can barely even fathom a more glorious conglomeration than Civilization and Choose Your Own Adventure, prepare to absolutely lose yourself in King of Dragon Pass. …Read More

In addition, development has started on the iPad version of the game, which is glorious news for iPad-owning fans to the game. In fact, my only real issue with KoDP is that I really wanted to play it on the iPad and text-based games with mega-pixelated fonts running in 2x mode just doesn’t jive with me. From the sounds of it, the developers are just starting on work for the iPad adaptation, and haven’t yet committed to whether it’s going to be a universal update or an entirely separate version… But I’ve got my fingers crossed.