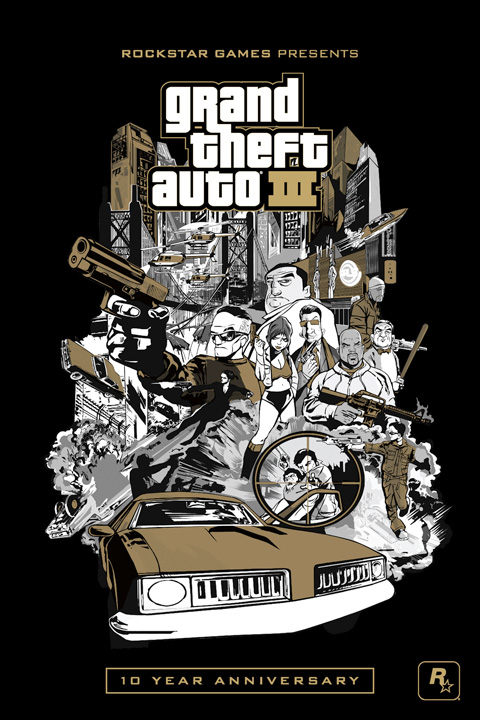 Last week, we told you the (somewhat) surprising news that Rockstar would be bringing the classic Grand Theft Auto III to iOS and Android platforms to celebrate the franchise’s 10 year anniversary of entering the world of 3D, and thus changing the open-world sandbox genre forever. At the time, Rockstar noted that the game was only planned for dual-core processor-based devices, due to the strain that running a huge open-world game would have on lesser mobile hardware. On the iOS side of things, that meant that only the iPad 2 and the brand new iPhone 4S would be able to run GTA III thanks to their dual-core A5 chips.

Of course, there are far, far more GTA fans than there are A5 device owners, and there was quite a backlash from gamers with older devices who were understandably upset that they wouldn’t be able to get their carjack-on without upgrading their kit. However, over the weekend Rockstar has been showing off GTA III for mobile devices in playable form at the New York Comic-Con, and in fact they have confirmed to Kotaku that the dual-core processor requirement will only be a limitation at first, and that they’re planning on having the game be compatible with single-core iOS devices sometime after launch.

Now, before you go getting too excited, they don’t specifically state which single-core devices they intend to target. It may just be the iPhone 4, since it’s the only other device with 512 mb of RAM, which could be a deal breaker for the iPhone 3GS and 3rd and 4th generation iPod touch. We really don’t know at this point, but at least the compatible device listing will be increasing in some capacity, which is a good thing.

Speaking of GTA III at NYCC, one adventurous attendee decided to muster up some courage and take a little video of himself playing the game on an iPad 2 demo unit. So far, it looks like the GTA III that we all know and love from 10 years ago:

Chances are pretty good that this video was not taken with the permission of the Rockstar reps on hand at the convention, so don’t be surprised if the video ends up disappearing sooner rather than later. But for now, it’s a nice glimpse into what GTA III will be like on mobile. Also, though it’s hard to tell from this shaky video, various other outlets’ hands-on impressions of the demo build so far all state that the visuals have been given the high-res treatment, or at least as high a resolution as a 10 year old game can have. This leads me to believe that the GTA III we end up getting on iOS is based off of the superior Xbox version, though that’s just a bit of speculation on my part.

GTA III is scheduled for a Fall release, and if it’s anything like their launch of Chinatown Wars on iOS, we may be seeing the game incredibly soon, as that title popped up just a few short days after they were showing off preview builds to the media. That’s more speculation on my part, but I remain hopeful. Until the game actually does launch, feel free to check out our forums where GTA III: 10th Anniversary Edition is getting a healthy amount of discussion.

Update: The fine gentleman who filmed the above video, Raymond Wong, has reached out to us to clear up a couple of assumptions on my part. First off, the Rockstar rep was right there as he was filming and seemed to have no problem with it. Apologies for thinking there were shady pretenses around the filming of the game, Raymond. Secondly, there’s a bit of confusion as to which version of GTA III the iOS version is based off of. One Rockstar rep claimed that it was an upscaled version of the PS2 game, but then a different rep later said it was based on the PC game. I guess we’ll find out soon enough, and really, as long as it looks good I really don’t care which version it stems from.

Finally, the build in the above video is supposed to have camera control via swipes, but Raymond didn’t notice it while playing. Also the final build should have an accelerometer control option for driving, but didn’t at the time of the demo. Thanks again Raymond for getting in touch and clearing up these things.

[Via Kotaku and our forums]