One of my favorite genres is the adventure genre, since I was brought up on games like Shadowgate, Zork and Myst. So I admit that before even starting Cryptic Keep [$1.99], I was already rubbing my hands together in anticipation over the idea of it. A deserted castle? Stubborn puzzles to solve? Mysterious music? Why, maybe there would even be the useless combining of items that make no sense together! Wait, what’s the appeal of this genre again?

All jokes aside, though, Cryptic Keep looked like a possibly watered down, but still interesting adventure title. You begin the game at the doors of a great castle which was locked down by a royal old dude named King Telvonus, but of course, the Sword of Ire is inside (why he would leave it there instead of taking it on his journey for protection is anyone’s guess), and its up to you to get it. Ah, flimsy iOS stories, how do we love thee? Or rather, how do we ignore thee as we barrel past you in favor of the gameplay. 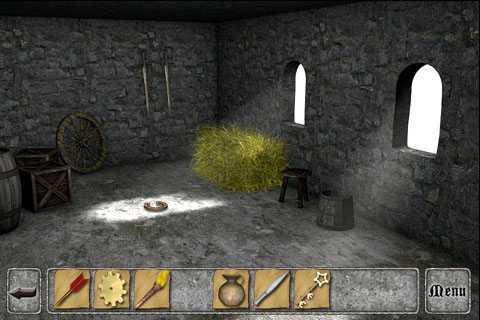 Cryptic Keep is first person, and it operates in traditional adventure style. Rather than clicking a mouse to explore your surroundings, a tap of your finger will get you where you need to go. The game has no NPCs at all, so all of your travels will be solo. However, this lends to the mysterious feeling of the game, and I rather liked it. Now, of course no keep has unlocked doors, so to even get inside you’ll have to start solving puzzles right off the bat. You have a small inventory bar on the bottom of your screen where items you pick up will go, and you’ll need to decide how to use these items in your environment to make progress. What do those runes on the anvil mean? Why is there a frozen skeleton standing in the courtyard? All this and more awaits you as you wander this castle and wonder why Telvonus ever left in the first place.

One thing that bears mentioning is the load screens. It sometimes taks five seconds or more once you click a direction for the next screen to load, and let me tell you, for an iPhone game, that seems long. This is one of the downfalls of Cryptic Keep, and I admit it got under my skin after a while. There’s no way those three footsteps took that long, you know?

The other thing about the game that I wasn’t crazy about was that the puzzles were rarely a real challenge (although I did mention I cut my teeth on much harder game in this genre, so maybe I’m a harsh critic). The game itself is very short, and finishing it in one sitting is a pretty straightforward task. The developer has promised more puzzles in a future update, but it’s good to know before you buy that your $1.99 may buy you an hour of gameplay, maybe two at most if you’re not much of a puzzle solver and you get stuck here or there.

Cryptic Keep is good, but not great. For adventure fans looking for a fix, it may provide some entertainment, but there’s something about it that feels a bit generic. That being said, I can’t say I didn’t enjoy going back into adventure mode to solve some puzzles and make my way into the heart of a mysterious castle. Perhaps it’s just nostalgia knocking at my door, but despite its flaws, I felt that Cryptic Keep still had a good amount of fun to offer.