When Chaotic Box released Silverfish [$1.99] for the iPhone in November of last year, it got all kinds of love from both the front page and the forums here at TouchArcade. Plans for an iPad version were stalled for a time, but then the developer got his hands on an iCade. Apparently the jones to play his baby in cabinet form was the nudge he needed to get the wheels back in motion, and the iPad/iCade game libraries are now all the more richer for it.

For those unfamiliar with the title (or unwilling to read the iPhone review), Silverfish is a cat-and-mouse avoidance game. Take the minimalist art and aquatic theme of thatgamecompany’s flOw, give it a liberal dose of amphetamines, then replace the circular motions with 4-direction Pac-Man-esque controls, and you’re getting warm. Whether you’re fleeing from your enemies or turning the tables on them, some of the finest and most frantic action on the App Store is on offer here. The release of Silverfish MAX [$2.99] only adds to this game’s arcade appeal. 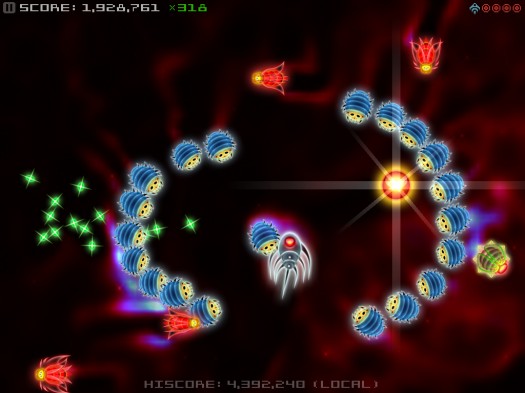 This iPad-centric version is more than a simple up-scaling of graphics. The game is re-drawn for the larger screen, and the actual playing field is also increased by more than a quarter over the original. This change impacts spawn patterns for both enemies and power pods. 25% might seem like a negligible tweak, but it changes the experience enough that the developer felt it necessary to make separate leaderboards for this version. More detail in the effects and models makes the visuals crispier than ever.

While the flick control scheme of the original was already preferable to the d-pad option, the additional real estate of the iPad screen makes playing the game with flick controls even more precise. When things got hectic on the iPhone, I found that slightly errant swipes often resulted in disaster. Silverfish MAX seems to be much more forgiving in this category, making it easier to enjoy the action once the enemy density and speed really picks up. The ability to adjust flick sensitivity is still included, and I definitely suggest playing with the settings to find a sweet spot that’s right for you.

Despite the improvements to the flick controls, the absolute star of this version is the inclusion of iCade support. The classic avoidance style gameplay always seemed tailor-made for an arcade cabinet format, and Silverfish MAX only confirmed those suspicions for me. Joystick controls are responsive and precise, and the game just feels right. 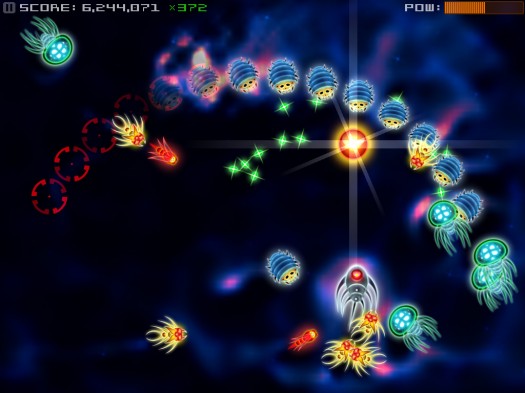 There is the occasional confusion between a game that features up-down-left-right motions and a stick that supports 8-direction movement. Pushing the stick on the diagonal will occasionally result in the game forcing you in an unintended direction, but this is a rarity and no more common than hiccups with the flick controls. Once I found the warm and familiar Pac-Man claw grip on the joystick I had stored in the dark recesses of my muscle memory, I found playing the game a sweet merger of nostalgia and neon.

Silverfish MAX is a worthy upgrade to its iPhone progenitor, and Chaotic Box capitalized nicely on the arcade-y potential of the original. It’s a should-buy for fans of the original, and a must-buy for iCade owners looking to add a strong title to a small library. I’m glad I forced myself to play with flick controls first, because now that I have it on a joystick I simply won’t go back again.